Oculus Touch VR Controllers bring the magic of hand presence - the feeling that your virtual hands are actually your own - to life in VR. As part of the Rift product family, Oculus Touch provides accurate real-time hand tracking, a touch-sensitive control interface to enable social interaction hand gestures like thumbs-up, "ok", pointing, and a fully featured set of buttons and controls for intuitive and immersive gaming in VR. 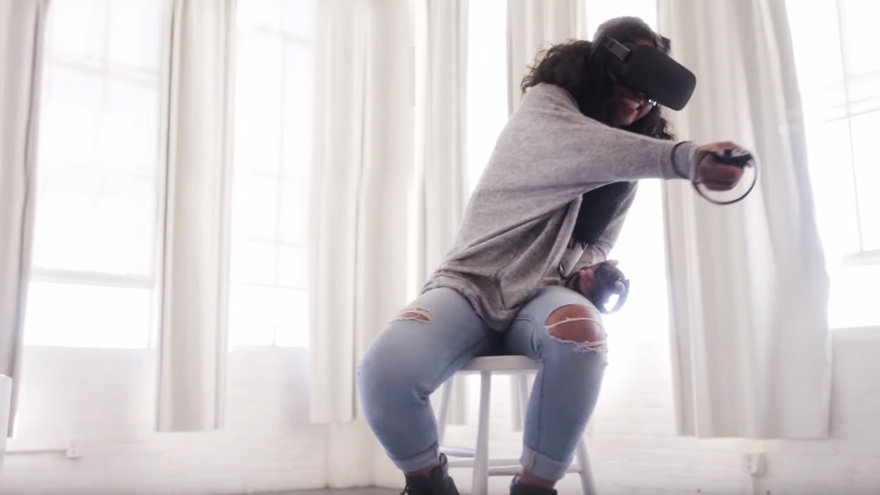 VR input is an open-ended and complex problem. From gloves to wands to wearable controllers, it is hard not to conjure up sci-fi predictions as you look into this space. During the process of designing Touch, we kept coming back to one crucial need: To enable meaningful first person experiences in VR, we knew we had to see our own hands within the virtual environment. This fundamental desire was critical to framing the key problems we had to solve: how do we bring hands to life in VR, is simply tracking our hands enough, and how can we make Oculus Touch intuitive enough that anyone can pick it up and begin to use it?

Bringing the hands to life in VR Bringing hands to life in VR requires having the ability to capture a person's natural hand pose during use. The handle form was sculpted to comfortably fit a wide range of hand sizes while supporting a resting hand posture that felt natural both visually and ergonomically. This equates to less stress and fatigue for the person holding the controller, less need to modify their grip to reach the controls, and makes the controller feel like a natural extension of the hand during use. The uniquely integrated grip button located on the handle provides the ability to open and close your virtual hand with analog control. Additionally, by embedding a unique application of capacitive electrodes under key controls, we are able to track the user's finger placement on the controls, allowing your virtual hand pose to represent that of your real hand. This enables social hand gestures like pointing, giving a thumbs-up, and "ok", among other gestures. The simple act of waving to a friend or giving a thumbs-up in VR brings another level of immersion to the experience that was previously not possible using traditional game controllers or input devices that are only able to track controller orientation in VR space.


Enabling hand tracking Accurately bringing the motion of your hands into virtual space meant finding a way to elegantly integrate Oculus's LED based constellation tracking system into the controllers. The tracking ring, a major element defining the product icon, contains a unique array of IR LEDs surrounding the user's hand ensuring visibility of the LEDs to the tracking sensors during motion-based games and experiences. The placement of the ring relative to the hand moves the center of gravity closer to the grip axis, improving balance and reducing the feeling of inertia during motion and reduces the overall size of the controllers. To obscure the complex embedded technology to the user, the housing is molded in IR-transparent resin allowing us to reduce the visual complexity of the device and to keep the external surfacing smooth to the touch.


Supporting intuitive interaction To provide more utility and feedback, we looked to integrate a familiar set of controls in a way that was ergonomic and easy to use. Buttons and triggers were placed directly below where the thumb, index finger and middle finger naturally rest when holding the controller. The thumb stick, trigger, and middle-finger button pivots all align with the joints of the fingers to allow for more precise control during actuation. The angle of the handle relative to the top plate interface lets the thumb and index finger move autonomously, allowing for more precise simultaneous manipulation of controls without sacrificing a secure grip.


Creating Oculus Touch required close collaboration between the design, engineering and product development teams. A true iterative process built on prototyping – from hand built, 3D printed, CNC machined, to fully-functional prototypes usable in virtual reality – was employed to define the critical hand controls, integrate tracking technology, and refine the form, ergonomics and product interface. The final result is a carefully considered combination of form, function and ergonomics to enable magical interactions in VR, while creating an ownable icon for the Oculus brand.