Design Build: Street Seats is a project-based undergraduate course which enables students in The School of Constructed Environments at Parsons School of Design to partner with the New York City Department of Transportation to design and build a public urban space. According to the NYC DOT, Street Seats is a "citywide program where local partners apply to transform underused streets into vibrant, social public spaces during the warm weather months. Street Seats are installed in the roadbed along the curb line to create an attractive setting for eating, reading, working, meeting a friend or taking a rest."

Promoting urban social and environmental sustainability, the class is predicated on collaboration and the idea that a group can accomplish what an individual cannot. Every spring semester since 2015 students at Parsons have worked as a team to design and build a unique Street Seats installation on the northeast corner of 13th Street and 5th Avenue in Greenwich Village, in front of The New School University Center. Designed to have a limited lifespan, from late April until late November, the installations are often built with materials that are sustainably sourced and can be recycled or reused when the installation is removed. Students navigate the dynamics of designing and building as a team while also interacting with external partners such as the NYC DOT and structural engineers, and various departments within the University such as Facilities Management and Safety. Offered as an elective through the BFA in Architectural Design within the School of Constructed Environments at Parsons, the course welcomes students from all areas of the University.

The students in the class begin with individual ideating, but soon form teams to synthesize and further develop their ideas. Within the first 6 weeks of class, 3-5 proposals have been refined into a single final proposal. The final scheme is reviewed by a structural engineer and by a representative from DOT. In addition, members of the facilities team at The New School weigh in on safety requirements and on any perceived hazards. These interactions require students to consider not only the material sustainability and economy of the project, but also to think about its structural integrity and the relationship between structure and design ideas, and the service aspect of the installation—what maintenance is required, who will do it, and how that factors into the design. Students source their materials, looking at issues of carbon footprint, material lifecycles and structural efficiencies, put together a budget, organize and manage material deliveries, fabricate the work within the Parsons Making Center, schedule installation with the NYC DOT and New School Facilities Management, install the piece (ideally on Earth Day), and arrange to remove and recycle the project in the late fall. 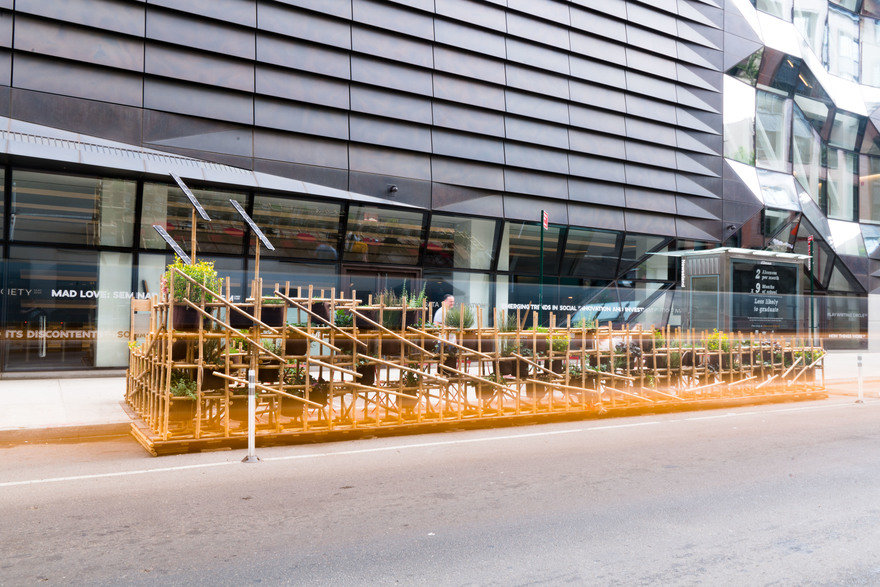 Street view The installation was located on the corner of East 13th St. and 5th Av. Finn Harries 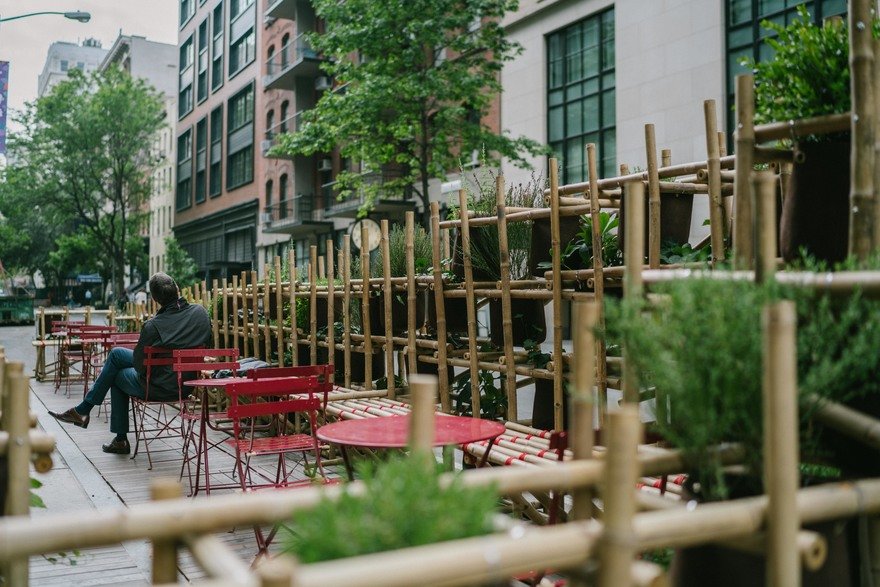 Detail view from sidewalk Next to the sidewalk, a bamboo structure with plants provided a welcoming place for resting. Finn Harries 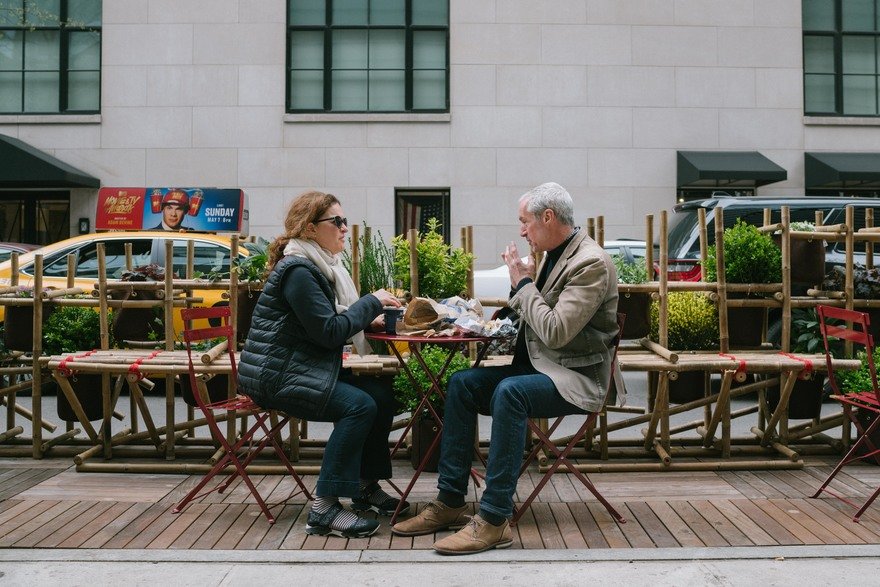 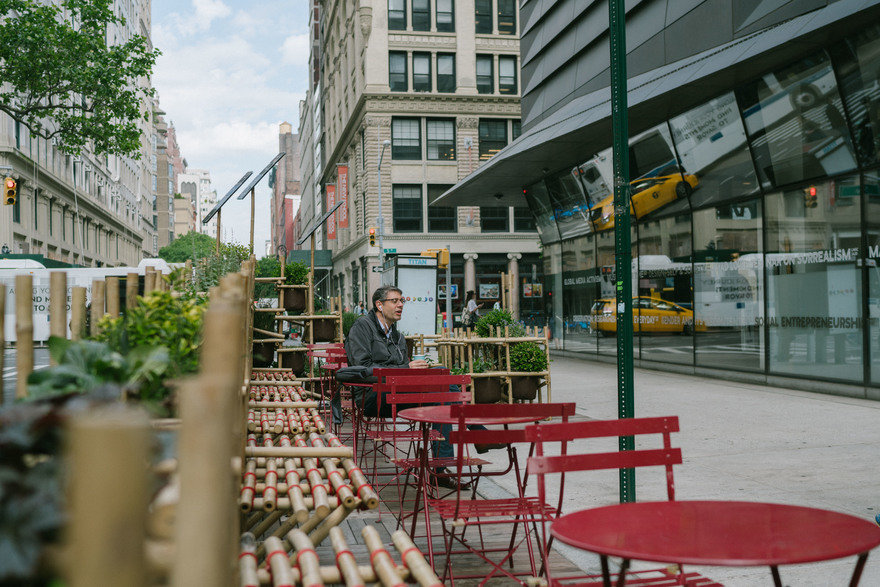 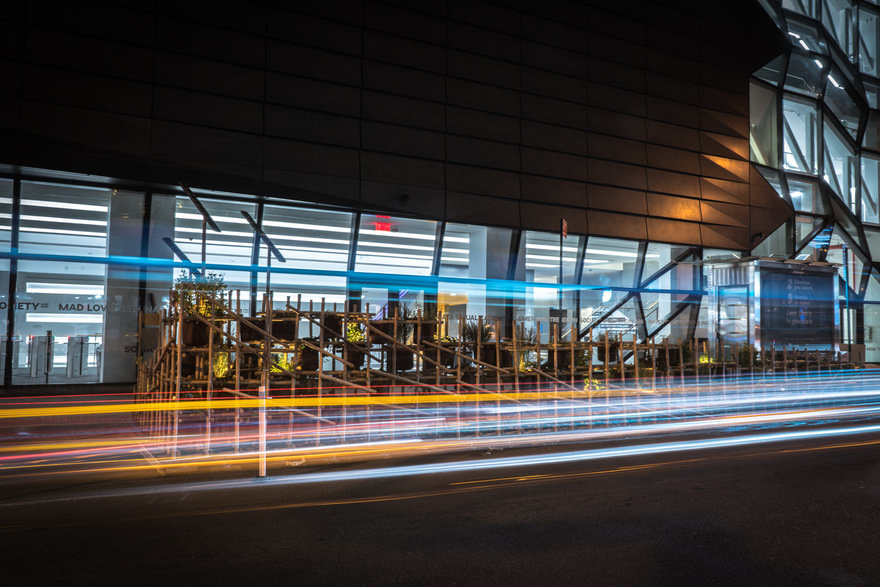 Night view An Arduino and light sensor turned on the illumination automatically after sunset and powered it off at midnight for recharging next day. Finn Harries 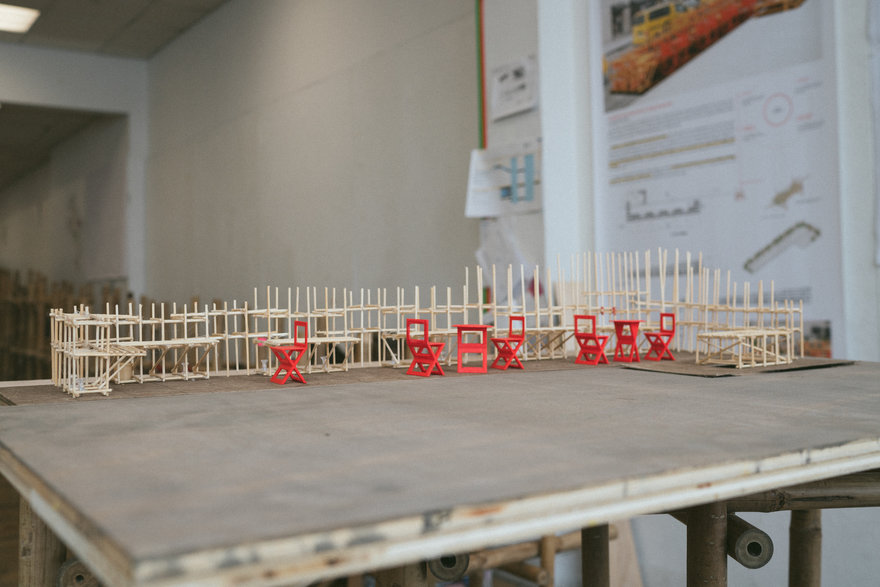 Model detail The class went through three weeks of rapid group-based iterations of designs before settling on a final proposal. Finn Harries 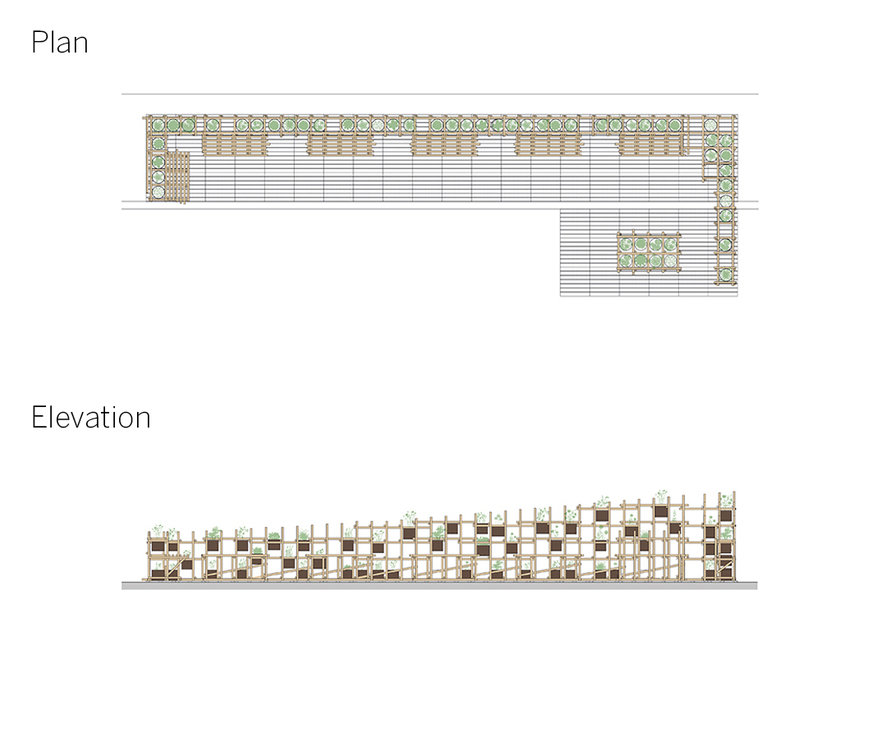 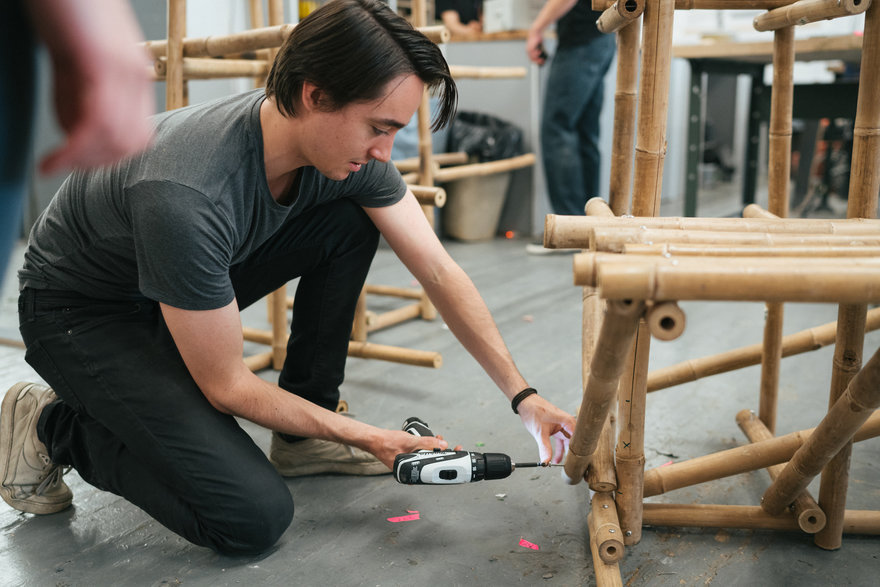 Learning by making Students prototyped, tested and refined their designs in order to get approval from the Department of Transportation and the structural engineer. Finn Harries 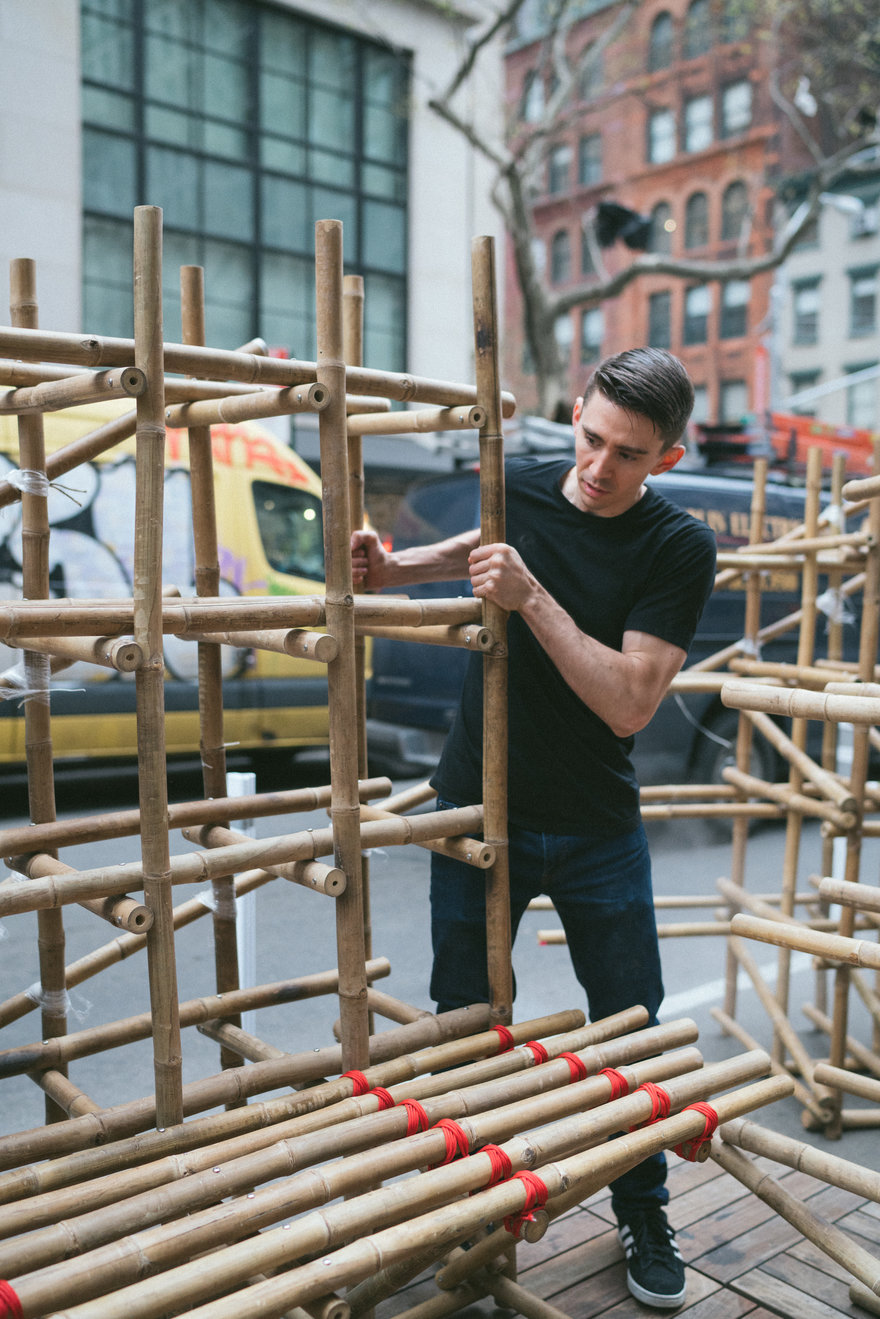 Modular installation planning The design consisted of sectional modules prebuilt in the workshop and taken to the street to be installed in a single day of work. Finn Harries 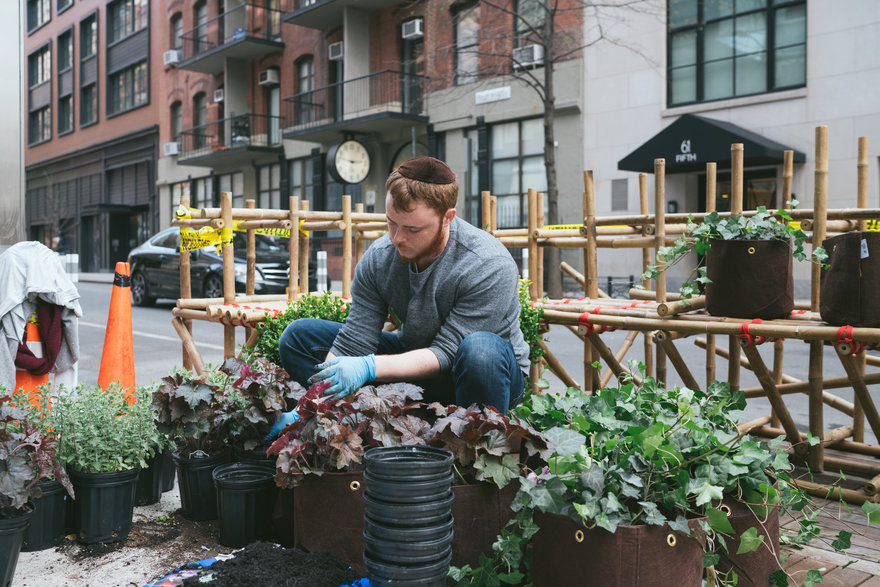 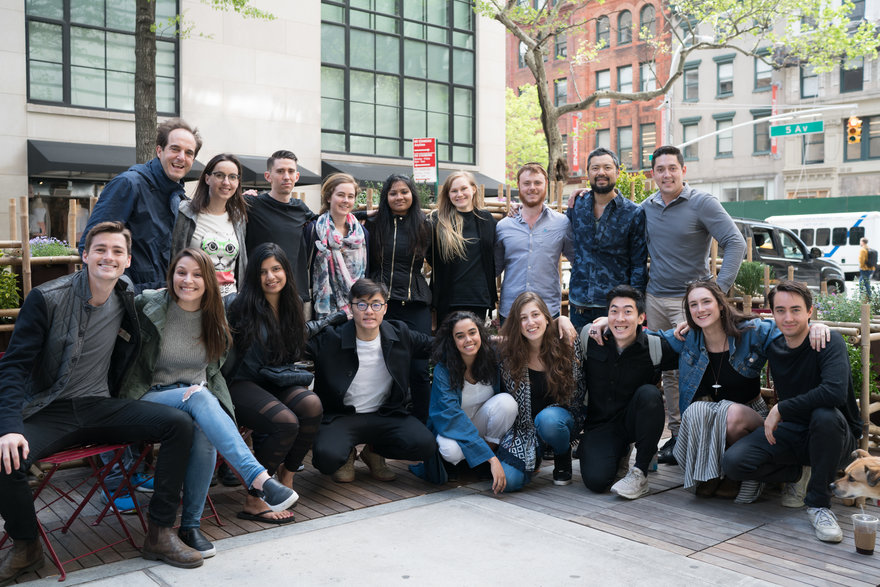 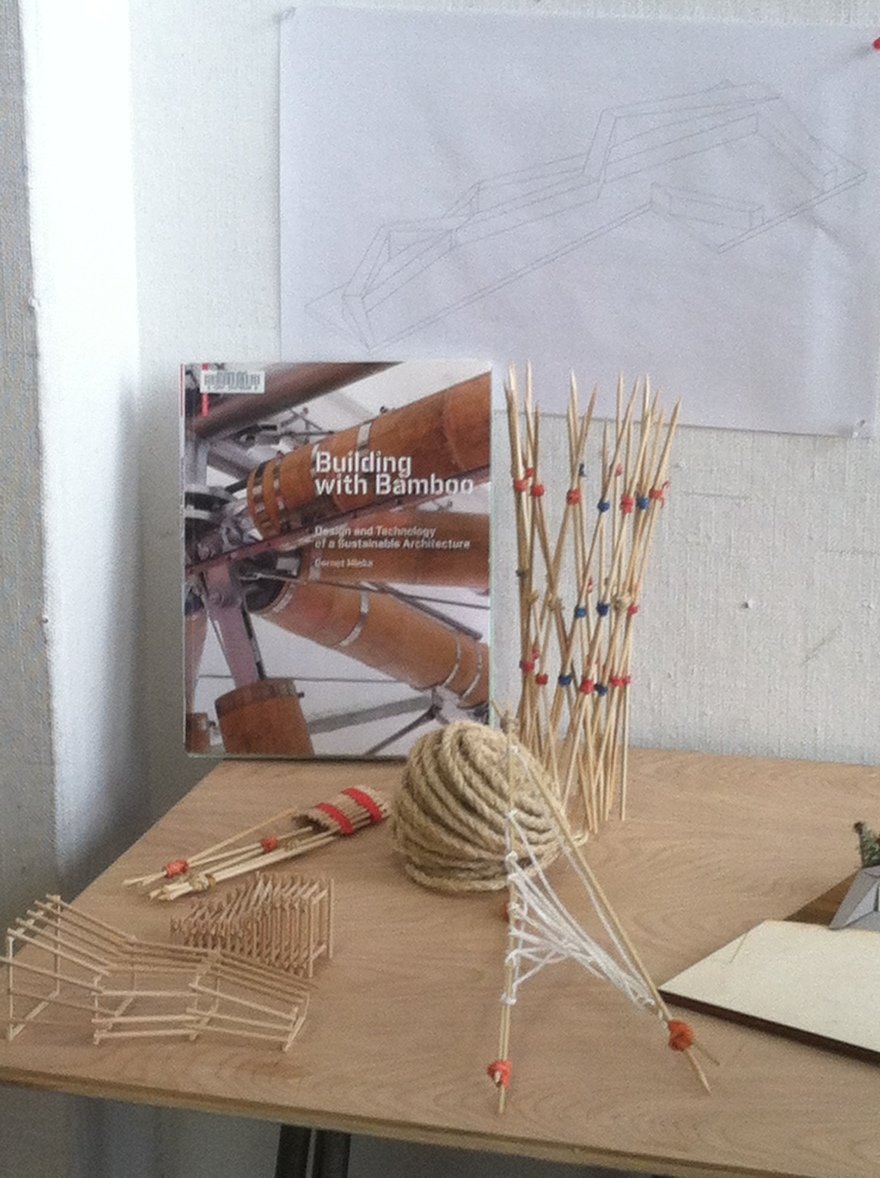 The 2017 iteration of Street Seats, taught by Parsons Adjunct Faculty Huy Bui and Carlos Gomez de Llarena, engaged students across disciplines, from Architectural Design, Interior Design, Product Design, Integrated Design, Design and Technology, and Lighting Design. The class explored the meaning of materiality and impermanence, with the intention to incorporate natural, time- and weather-dependent elements of vegetation and solar illumination into a cohesive urban landscape. Originally inspired by the use of bamboo as a scaffold-building material in Asia, the class chose the fast-growing and easily renewable plant as the primary building material. By lashing it into a framework and reinforcing it with mechanical fasteners, the students built benches and planting boxes that referenced the New York City grid as well as scaffold-building techniques employed around the world. Within this framework they hung 75 planting sacks made from recycled plastic water bottles (also known as "root pouches") that contained drought-resistant plants, in acknowledgement of both maintenance and durability.

The structural frame is made from 360 pieces of Vietnamese bamboo. The design acts as a multi-level planter creating an organic separation between the roadway and the sidewalk while providing six benches that cantilever off the main frame. Students recognized the importance of encouraging occupation of the Street Seats installation during the day, while also dissuading any attempts to sleep on the bamboo benches overnight, by installing low bamboo dividers.To provide dusk and night-time illumination to the installation, twelve solar panels mounted to the bamboo frame provided energy to LED lights embedded into the planters. This solar-powered lighting was connected to an Arduino micro-controller and light sensor, and triggered the lighting of plants until midnight—at which point they shut off to allow batteries to recharge during the day, and in consideration of the neighbors.

The process of designing and building as a team began at the start of the spring 2017 semester and engaged fourteen undergraduate students and two graduate research assistants. As with any design build project, the students were immediately made aware of time and budget constraints, especially as the course endeavored to dovetail the final installation with Earth Day, around the eleventh week of a fifteen week semester. The class ran as a six hour per week studio elective, and students quickly learned to balance the requirements of the class with the demands of their other courses. Students understood that a project on the streets of New York City represented an opportunity to have a great impact on the social life of the street and the neighborhood, for a limited period of time, beyond the confines of the University. Learning how to collaborate, communicate, design and build as a team was a process that Bui and Gomez de Llarena fostered by organizing an iterative design process consisting of three distinct rounds of proposals and reviews. In the first week, fourteen students were organized into three groups, each of which interpreted the brief and pitched a design direction. Each pitch, which entailed drawings, sketches, renderings and physical models, was discussed and voted on by the whole group. Students collectively identified the best ideas, reorganized into two large groups, and further refined those ideas for the second round. Finally, by the third week, the class coalesced into a single large group focused on a cohesive design plan for execution. Prototyping and testing ensued in the following weeks. Ensuring that each individual voice found purpose in the process was crucial to the success of the class and the project as a whole.

The 2017 Street Seats installation provided a space of rest and respite for residents of the neighborhood, local students and visitors to the area, within the busy metropolitan environment in which it is located. The project also intended to encourage the awareness and implementation of alternative materials that have a lighter environmental footprint than some of their counterparts.

Street Seats is a space shared on a daily basis when it is activated by its users. Noting how it was occupied to capacity during the spring, summer and fall of 2017 attests to its value to the University community and the City of New York.