Think of all the devices you use every day – smartphone, remove control, tablet, electric toothbrush, even your smoke detector. Now imagine you never have to plug them in to charge them or replace the batteries again. Cota keeps devices remotely and automatically charged so that you can dedicate the mind space used for "remember to charge your phone" to more important things.

Cota is a charging base and receiver system that delivers real wireless power through the air. The base charges all Cota equipped devices within a 30-foot radius. This means no plugs, no charging stations, no replacing batteries. It's the freedom of not having to remember.

We designed two concept charging bases: a ceiling tile (Cota Tile) and a standalone unit (Cota Transmitter). Our design transforms a functional technology into a product that represent the innovation it contains while blending into home and office surroundings. The visual language is striking yet subtle, and translates effortlessly from cylindrical to flat base stations. 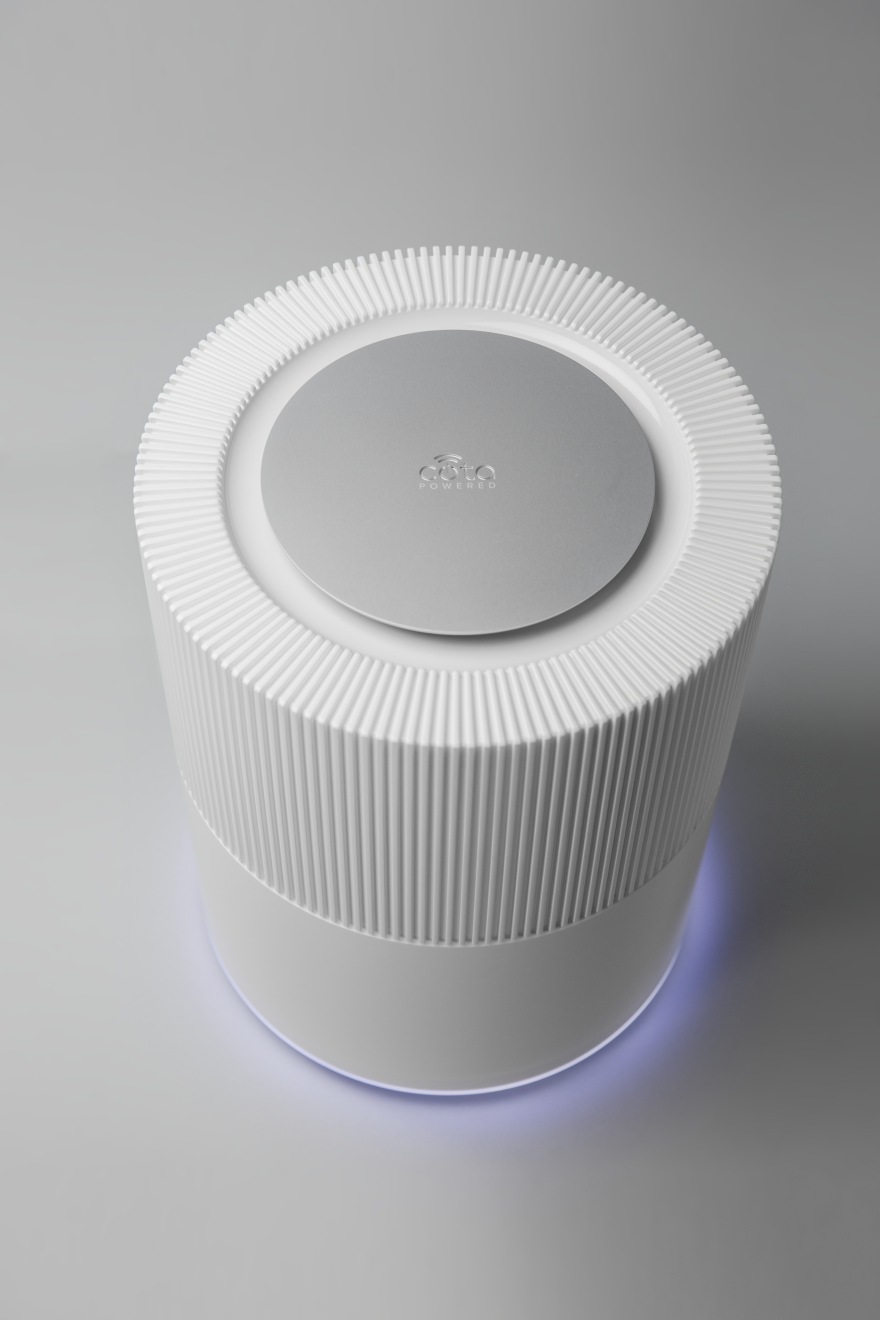 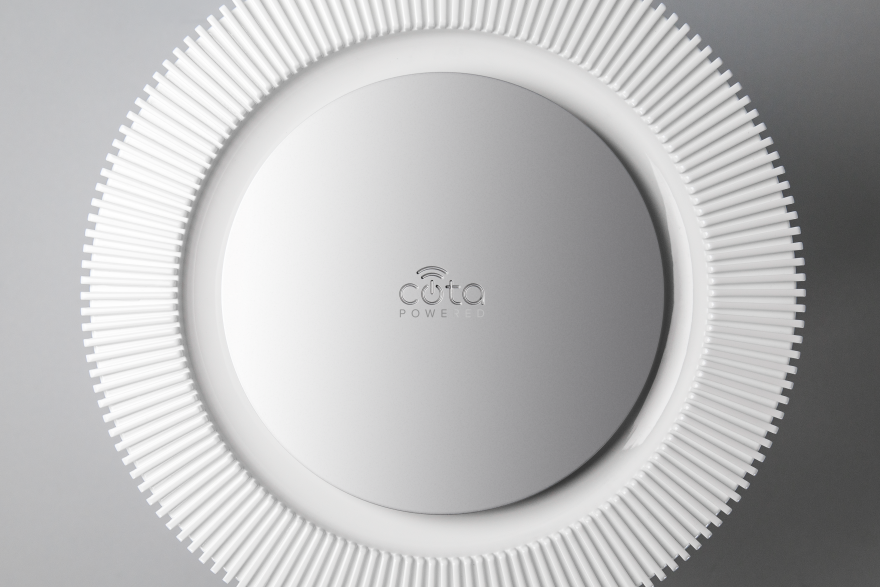 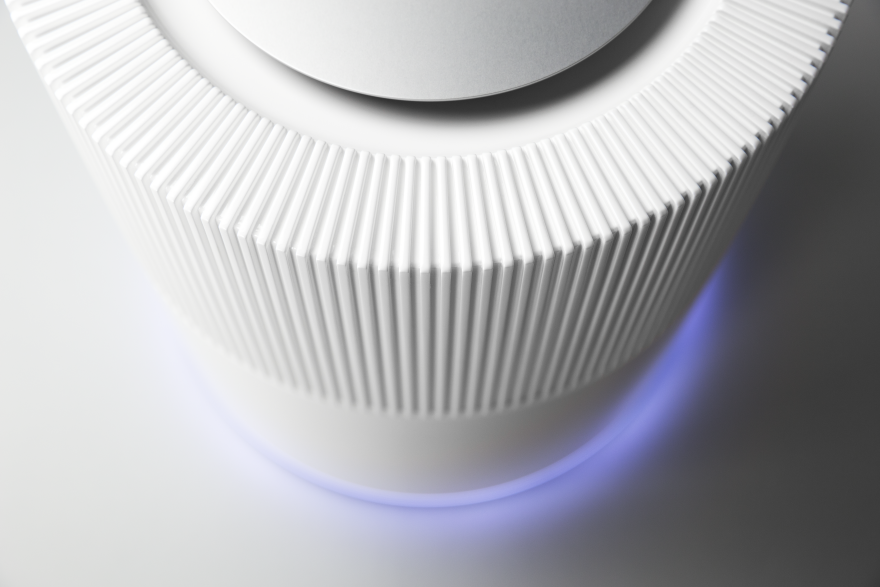 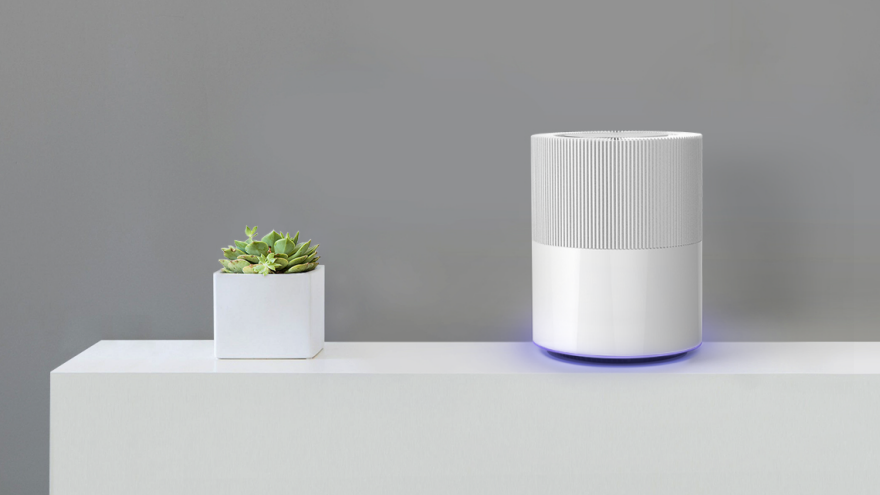 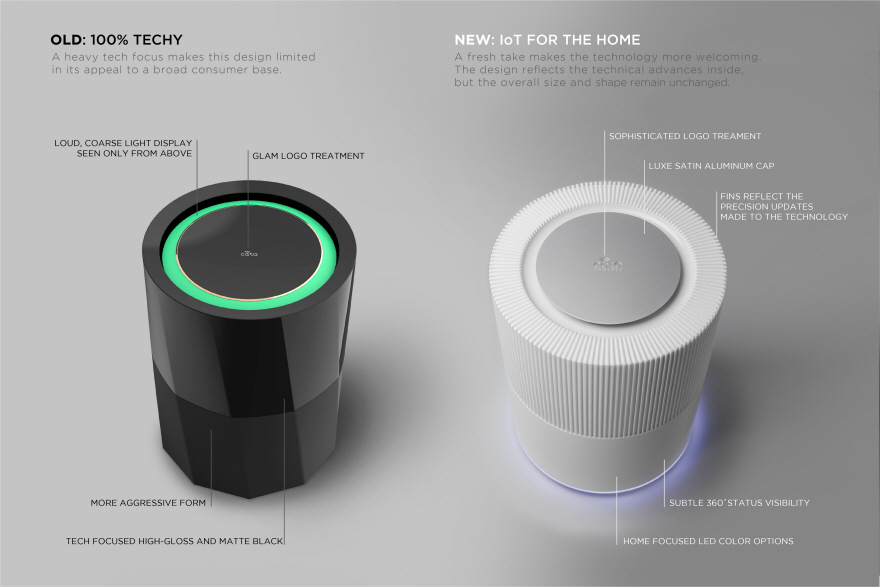 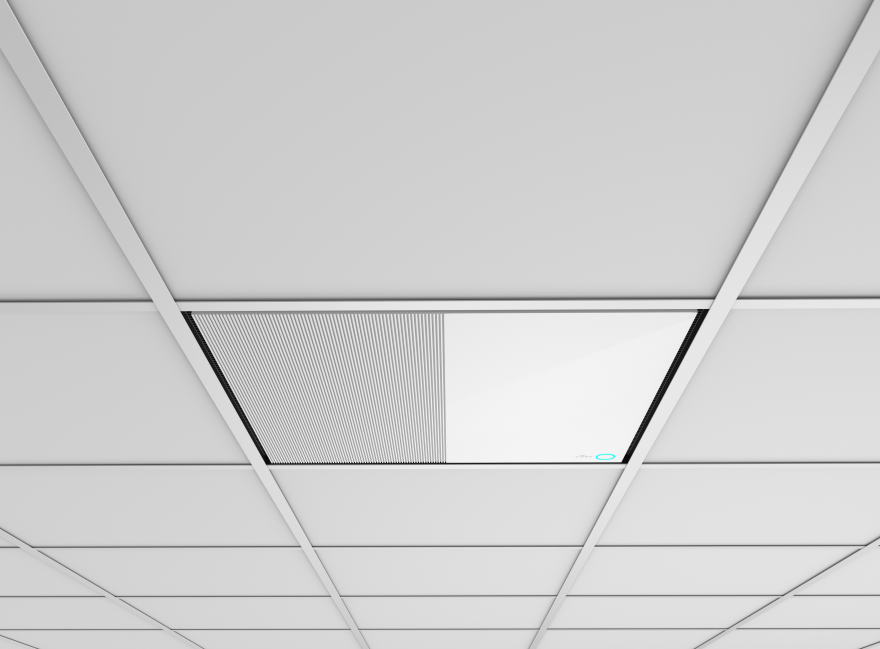 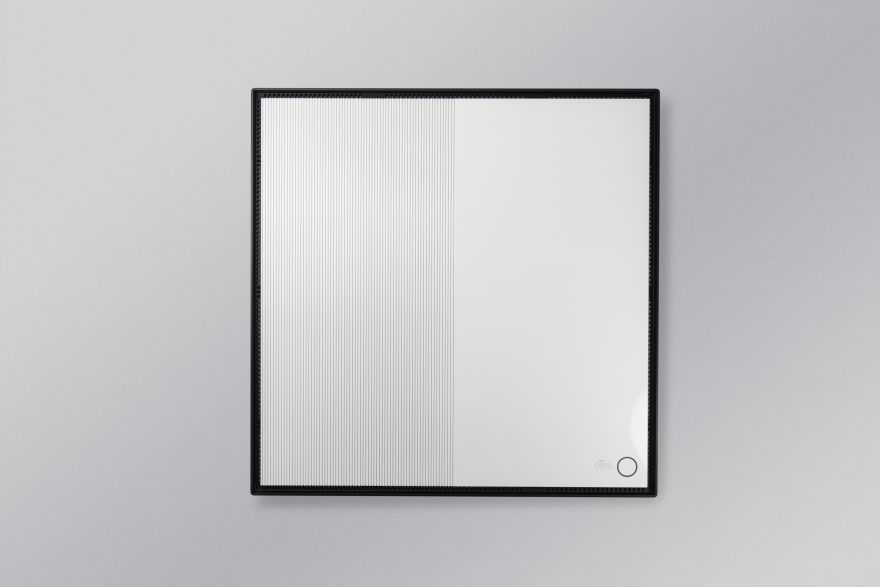 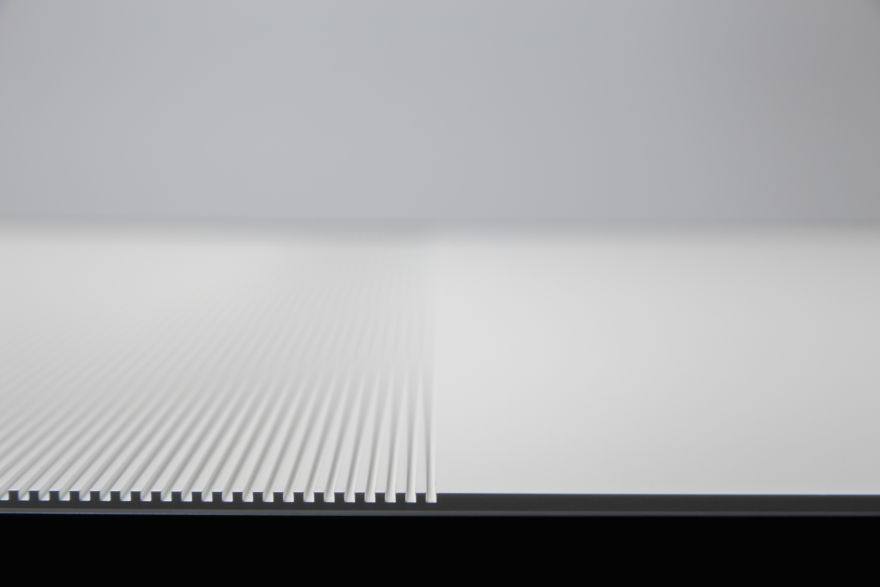 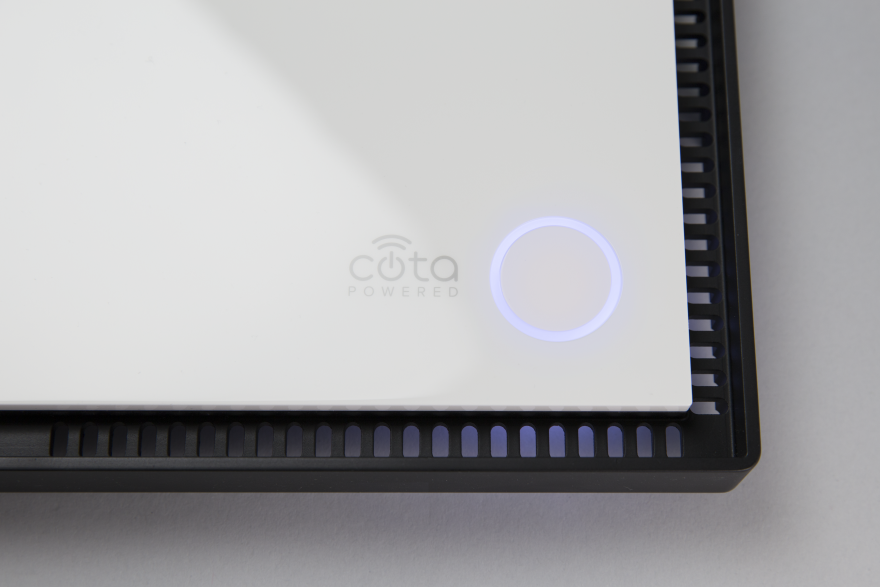 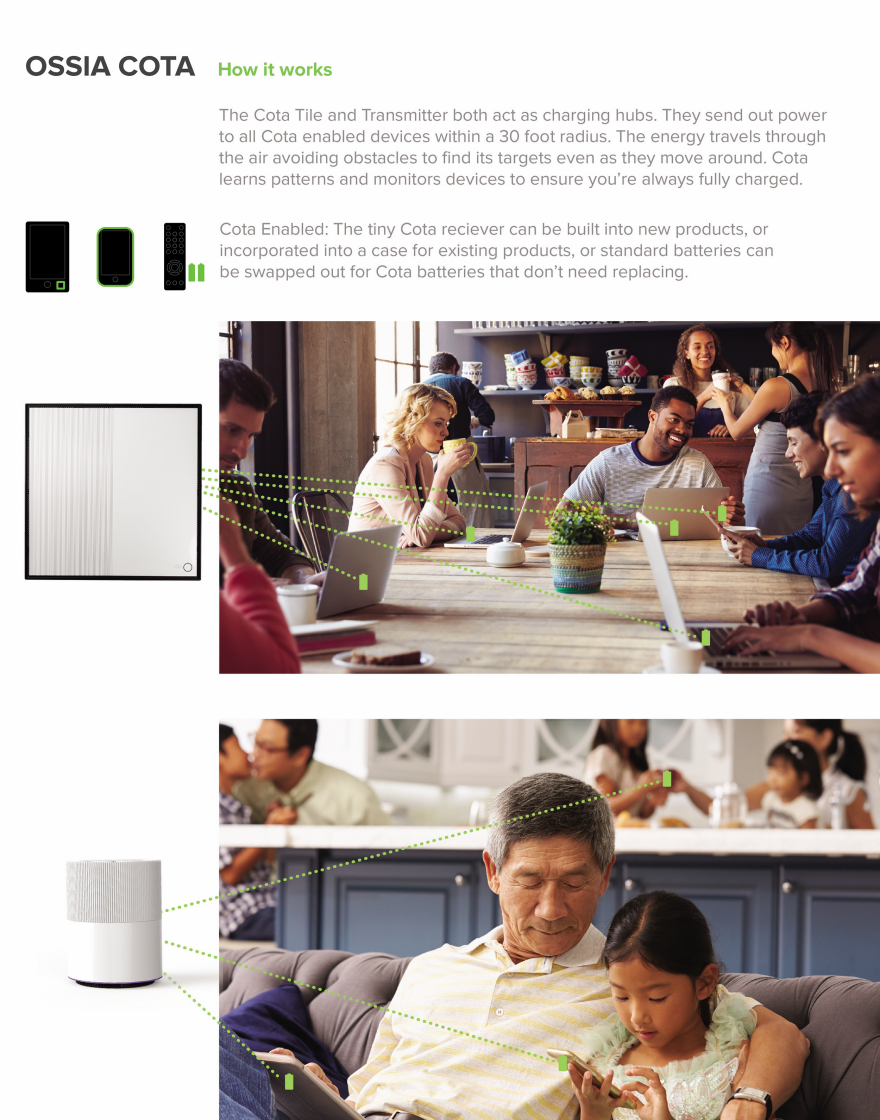 Note: While not commercially released yet, the Ossia's Cota technology is fully functional in the applications shown within this submission. This is not vaporware.

The major design challenges included: building trust, creating a form that can easily adapt to a variety of environments, and managing RF design constraints.

The concept of power distribution through air is brand new, and will need to be presented to people in a way that allows them to build confidence with its efficacy and safety. While much of this is done through marketing communications, the industrial design aids this goal by packaging the technology in approachable form factors.

The cylindrically-formed base station communicates Cota's 360-degree transmission capability and enables it to fit in a variety of home and commercial applications. In the corner of a room, under a coffee table, on a shelf all feel natural with its omni-directional form. The fine fins arrayed on the upper half suggest the precise power dispersion throughout the environment.

The tile form is geared towards retail or commercial environments and replaces an existing drop ceiling tile, or incorporates into wall surfaces. It balances drawing attention to itself against fading into the environment. While the tile and cylindrical base stations are different in their architecture, the flexibility of the design language allows us to naturally connect the two with clean white surfaces and subtle fin features.

Both forms were specifically tuned and vetted by the designers and RF engineers to ensure peak performance. We had to adjust the proportions and depth several times to optimize the antenna placement and maximize the range of the signals.

When new technology products come out, they often focus on the tech-factor instead of the context of use. Because advanced nature of this technology, we wanted to visually emphasize its approachability. The white color gives the design a sense of lightness, and feels appropriate in both home and commercial environments.

The light ring at the base glows to indicate charging in a way that's sophisticated and soft and is visible from 360 degrees. It communicates status at a glance. The phone app enables you to see a more detailed charging status for each device, as well as pair new devices and set permissions.

The fins in the design represent the radial output of energy that charges your devices. It adds a macro texture to half of the transmitter which visually divides the mass. The vertical nature of fins elongates the appearance of the cylinder.

As the internet of things becomes more common, Cota delivers a power solution to seamlessly integrate devices into our lives

It is simple to use. Once the charging unit is plugged in and the receivers are in place (batteries or case in place), the devices are paired via the phone app. Then charging just happens. The Cota base is programmed to look for patterns in device usage, monitoring devices as they leave and return to your home or office and ensuring that every device within range is automatically charged to full capacity. A single Cota power charger can power up to 32 Cota-equipped devices within a 30-foot radius, even as you and your devices move around. Delight equals never having to remember to plug your phone in, never having to find your charger, never having to use your devices while tethered. No thought required.

Cota also has wider environmental benefits. Wired chargers consume energy continuously, but Cota is a clean-charging technology that turns on when your devices are within range and hibernates when not in use. The Cota receiver is incredibly small technology and can be embedded on a micro-chip making it ideal for use in even the smallest devices. With such a low profile, Cota can even integrate into the battery itself without changing the battery dimensions which makes solution integration affordable and environmentally-friendly (fewer batteries thrown away since a Cota battery doesn't need to be replaced).