A throwaway economy has produced enormous waste for more than 50 years on earth, and specifically, the overuse of disposable items has aroused to one of the most serious problems in the urban environment. A lot of educated individuals are aware of the problem, but a lack of actions has aggravated it in everyday lives. How might we reduce single-use consumption and how might design play a major role in this context?

Through two rounds of framework and case studies, I designed Nonliving Stakeholders, a new perspective regarding everyday objects as stakeholders. By integrating philosophy and design methods, the concept describes the objects that can be considered as stakeholders in the relationship among humans, objects, and nature since they have been utilized and victimized by humans.

The project used speculation as a tool to visualize the idea. The speculative scenarios enable us to have a mutual respect and responsible interaction with objects in our everyday. Furthermore, this project sheds light on how this perspective can be applied to current design methodology and service design discipline to address the notion of climate change effectively and to envision a holistically sustainable future. Beyond the design industry, this project expects to broaden the scope of its application in various fields and to develop practical strategies. 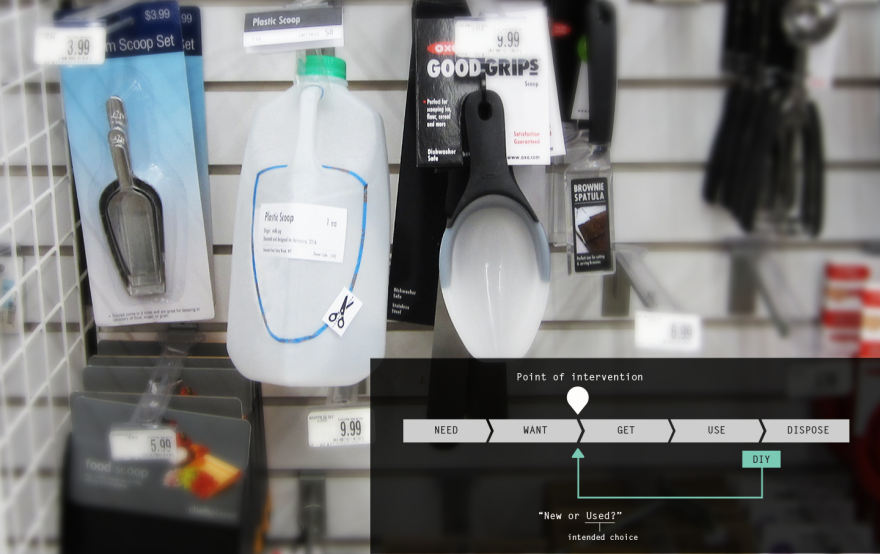 [Figure 1] Case study #1: Locally DIY "If a milk jar can be transformed into a food scoop at no cost, would you buy a new one?" 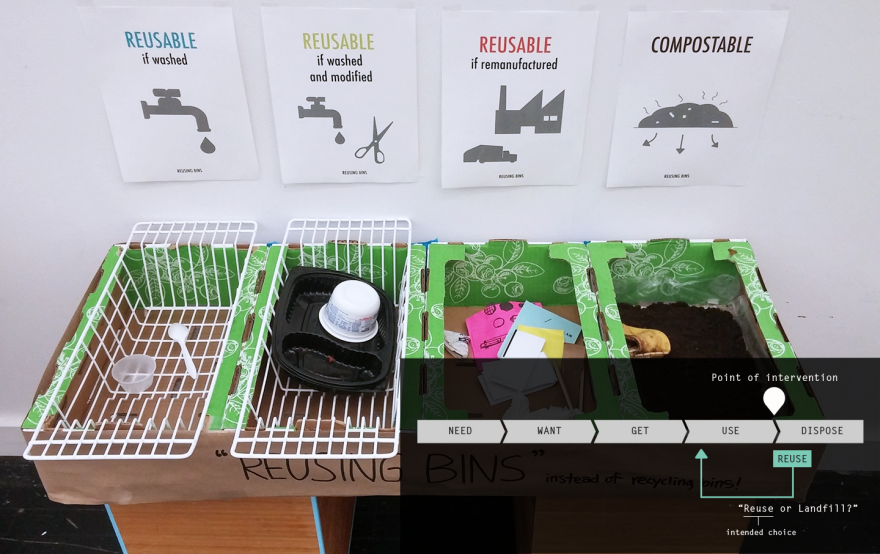 [Figure 3] Stakeholder map among humans, objects, and nature Objects have been pointed out as the main cause of environmental damage while providing services to humans. 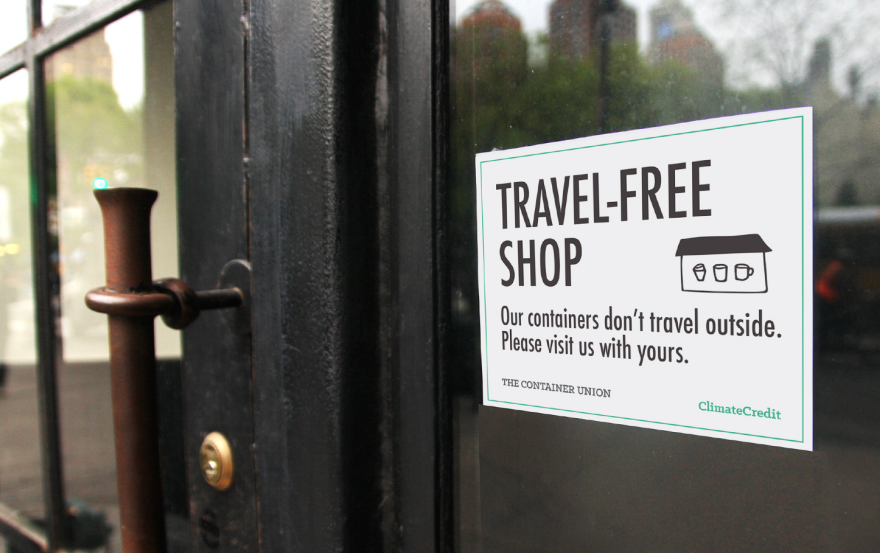 [Figure 5] Travel-free Certificate In this place, traveling of the in-house container is prohibited to minimize the risk of being broken or abandoned. Consumers are required to bring their vessels to enjoy drinks outside. 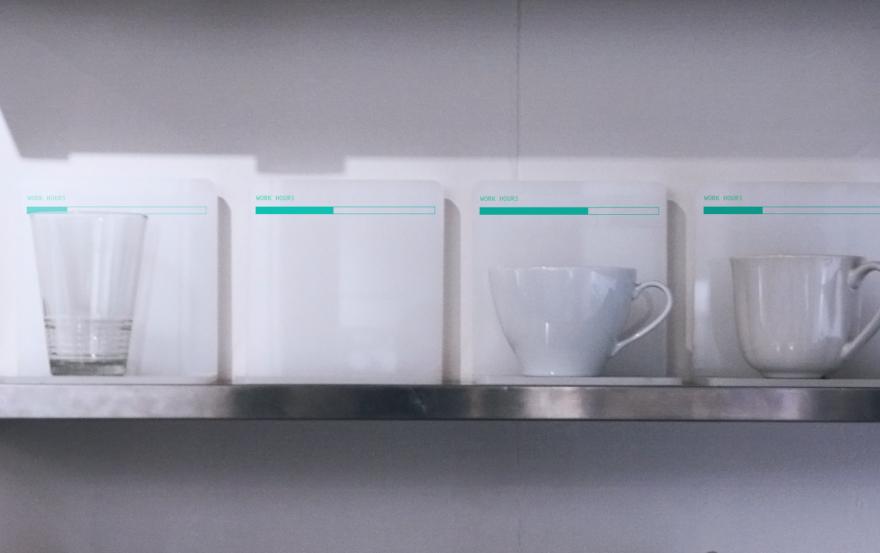 [Figure 6] Container Rest Station It keeps track of working hours for in-house containers per day to prevent them from overtime work. 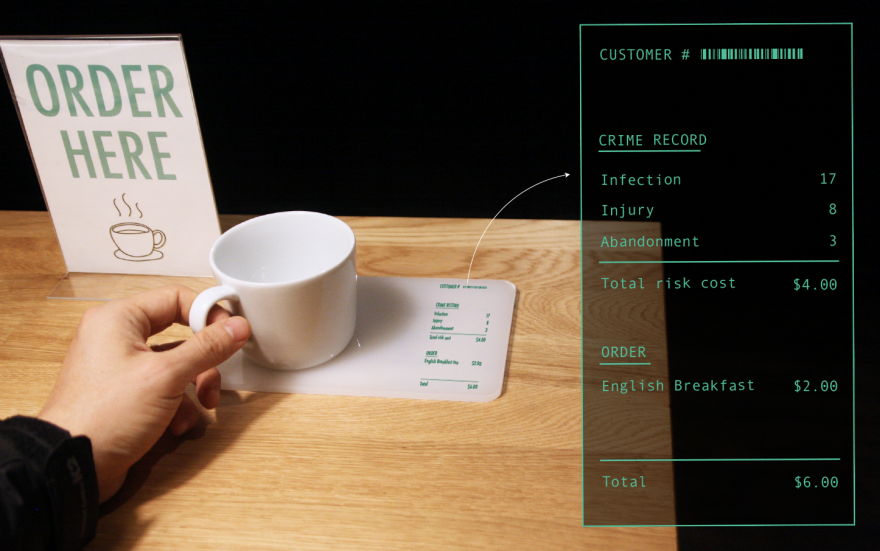 [Figure 7] Crime-based Price Calculator It measures the risk cost for a container with the price of drinks. Any potential behavior to harm a container by humans is counted as crime. Consequently, a human who frequently injures objects should pay more to use in-house containers in the future. 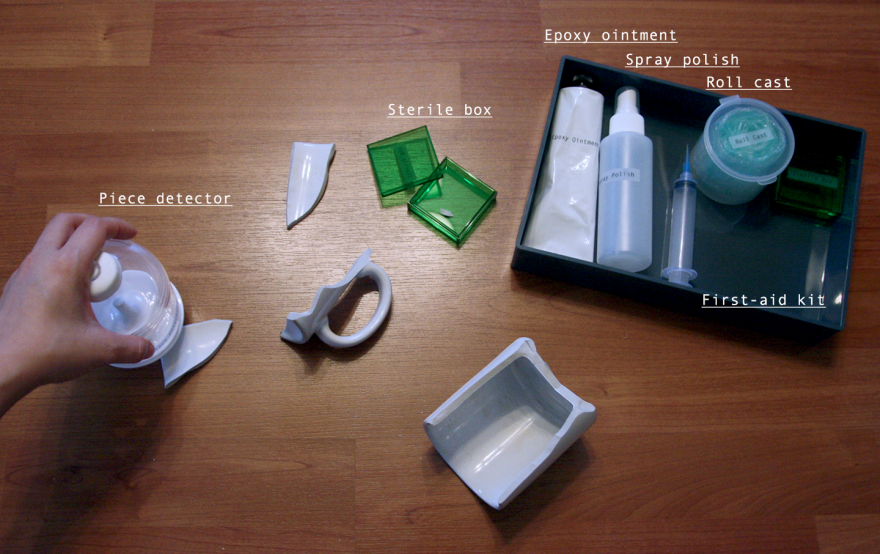 [Figure 8] First-aid kit The kit is stored in the café to prepare for the emergency of containers. It includes a piece detector to search and collect broken pieces, an epoxy ointment for immediate adhesion, a roll cast to keep the shape of the cups, and a sterile box to deliver the pieces to an external emergency room in a sterilized condition. 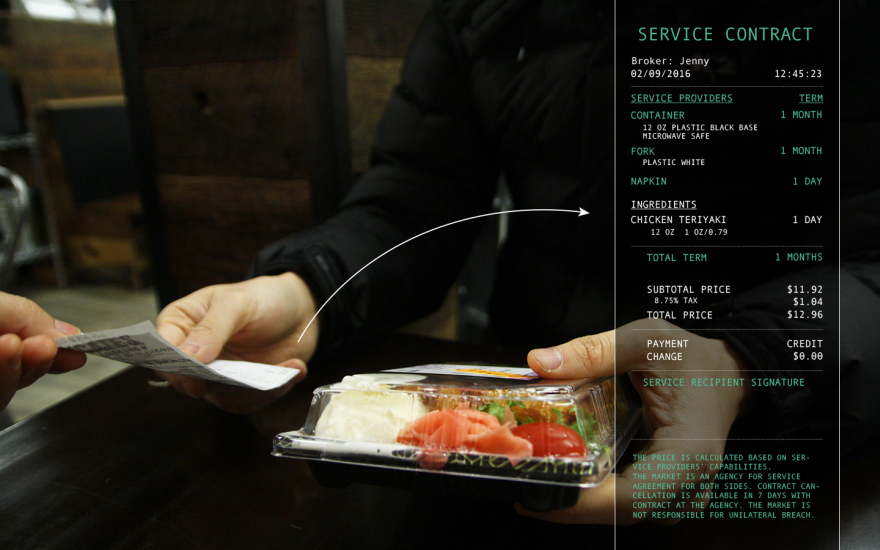 [Figure 9] Service Contract When a consumer purchases a chicken teriyaki, a plastic container, fork, napkin are service providers, and their terms are longer than the food. 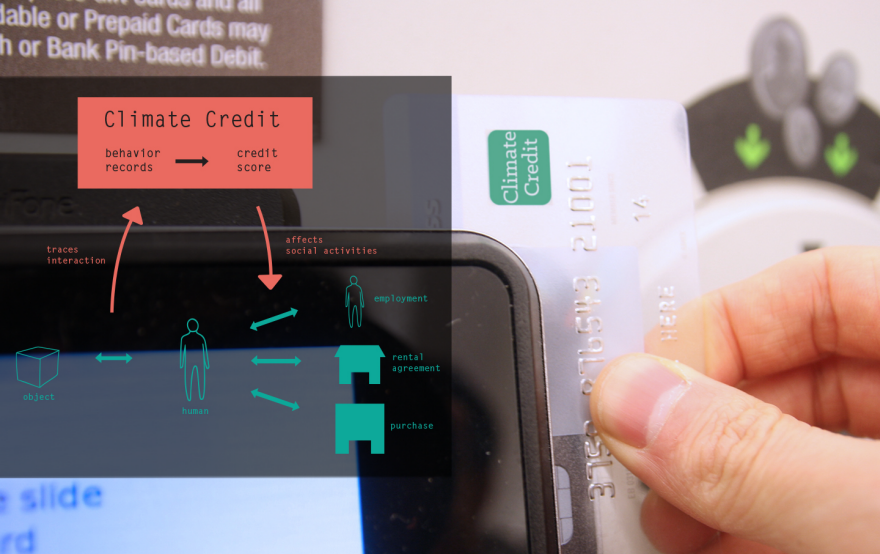 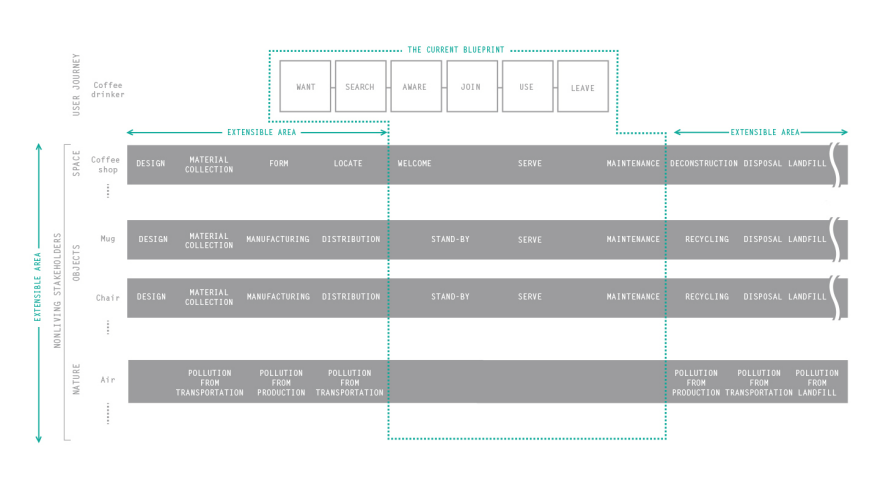 [Figure12] Next Service Blueprint A service blueprint might be extended both vertically and horizontally to identify the environmental impacts while designing a service.

A throwaway economy has produced enormous waste for more than 50 years on earth, and specifically, the overuse of disposable items has aroused as one of the most serious problems in the urban environment. In New York City, many educated people have intelligent conversations to resolve environmental problems, but they ironically cause waste by consuming disposable cups and plates during the events. Why do they use the problematic products although they know the items are harmful to the environment? The curiosity shaped the following project questions.

How might we reduce single-use consumption in our everyday lives?
How might design help to approach this wicked problem in a different way?

This project started by analyzing a decision-making model in the process of consumption. According to the model, people make a decision from the given options and information about its consequences. I assumed that some of the current consumption processes do not have a clear option to lead users to use reusable items.

I conducted two case studies which intervene the consumption processes and suggest an environmentally desirable option for users in the moment of decision making.

The first case study was to display reusable items at a store to encourage reusing existing items by modifying its purpose instead of consuming a new product. By showing an easy handicraft instruction on the used items, this intervention allows consumers to bring do-it-yourself(DIY) culture to the moment of purchase. [Figure 1]

The second case study is to categorize the waste by reusability instead of materials. It intervenes the moment of disposing of things and gives opportunities to utilize them for those who needs them shortly. While reusable items are collected, some in good condition would allow other people to harness them officially. [Figure 2]

Both cases had attracted the attention of the participants. However, they could not lead people to choose the eco-friendly option which is reusing the used items. One of the reasons that the case studies did not reach the intended choice was to fail in changing a personal perception about waste. Most people took it for granted that a used product is no more than the trash that is dirty, unusable, unpleasant and undesirable to reuse. Once they regard it as a waste, it is quite hard to change their behaviors even though they acknowledge that reuse is good for the environment.

Based on the insights, I have investigated the human attitude towards objects and the relationship among humans, objects (objects refer to man-made products in this context), and nature through a stakeholder map[Figure 3]. The objects have been manufactured based on human needs and have served humans for their entire lives. Nevertheless, they ultimately have been pointed out as the main culprit of environmental damage. Humans utilize both objects and nature, but they have not taken full responsibility after use. If we put ourselves in the object's shoes, objects can be thought of as victims because humans have always caused the environmental contamination. If objects are victimized by humans, can we consider them as stakeholders? According to the definition of stakeholder, "anyone who is directly or indirectly affected by the actions of an organization," the concept of the stakeholder is entirely applicable for objects.

The idea of considering objects as equal beings as humans goes along the lines with the eastern worldview in philosophy. In western worldview, humans are dominant species who have the right to utilize natural resources. In contrast to the western, the eastern worldview considers humans as one of the organisms interconnected with others. It even regards nonliving things as part of the ecosystem. Philosophers have also pointed out the weakness of the western worldview in dealing with climate change. Accordingly, the idea of nonliving stakeholders is helpful to establish more harmonious relationships not only between humans and nature, but also between humans and objects. [Figure 4]

If objects were stakeholders like humans, what would our everyday environment look like? To visualize the concept, I have taken advantage of a speculative design as a tool to describe this imaginary relationship.

To situate the relationship, I visualized some speculative scenes might happen in a café. The containers which work in the café not only provide services to human customers but also protect themselves by restricting business trip, keeping their working time, claiming the risk cost, or preparing for an emergency. [Figure 5-8]

According to the previous scenarios, it is not difficult to imagine a new credit system. In the future, any interaction between humans and products could be technically traceable. With this traceability, human behavior that affects the environment reflects one's credit. For example, overuse of single-use items is regarded as a socially poor behavior because ultimately it has a bad impact on our surroundings. This credit system could affect a variety of social activities such as employment, rental agreement, credit card application and so forth. [Figure 10]

This project moved forward to a next design methodology beyond human-centered design. It is true that humans are an essential element in the design, nevertheless, designing the world based on human-centric approach might be dangerous. Based on the perspective, the project proposes a next design methodology called Ecosystem-minded Design which means none of the entities is positioned in the center. Instead, all entities should be considered together in a design process. [Figure 11]

The concept of objects as a stakeholder can help to evolve service design in a comprehensive way. For instance, channels and touchpoints in a service blueprint such as space, product, or online can be stakeholders. Moreover, several elements of the natural environment, such as air, water, or soil can be natural stakeholders. We can identify how many entities besides humans are engaged in a service to provide a better experience for a user.

At the same time, the horizontal axis of the service blueprint can be extended by integration with a product lifecycle. The lifecycle of each nonliving stakeholder can illustrate its existence before and after the user journey. To satisfy the user, each nonliving stakeholder has been created, distributed, and eventually disposed. Meanwhile, natural stakeholders are damaged by both human and nonhuman stakeholders at every stage. The vertically and horizontally extended service blueprint visualize the fact that a single service that is designed for humans produces ecological footprints on many levels. [Figure 12]

This perspective can affect to current environmental activities. One of the current strategies attempts to substitute non-degradable materials to compostable ones. Another mitigation strategy is to increase public adoption of reusable items. However, no matter how much manufacturers use sustainable materials or how well they design the products in a sustainable way, they also keep adding a new type of 'products' on earth.These strategies have limits to resolve the problem because they approached the issue based on the thought that the objects are the major cause of environmental damage and they should be changed. If we apply the new perspective to this case, the one should be changed is human activities.

Compared to the recent business models such as the circular economy and sharing economy, which prolong the 'used' product's lifetime, this new perspective intervenes in the early stage of the product lifecycle to reduce unnecessary design activities and natural destruction before making 'new' products.

Impact on Internet of Things(IoT) industry

With the help of technology, it is feasible to expect the intelligent objects as described in the speculative scenario. However, current IoT industry has focused on producing business-oriented and feature-rich devices under the name of "smart." The intelligence of the smart objects is completely human-centric. Instead of a prevailing attitude, designers and scientists should be able to design its algorithm in more a humane and respectful way. IoT technology is not only an opportunity to start new businesses but also a chance to have a better relationship with objects.

The idea of regarding objects as stakeholders was not easy to conceptualize, but it was eventually shaped through some design methods such as empathy, stakeholder map, and speculative design. By shifting a viewpoint, we can expect to have a respectful and responsible relationship with man-made objects.This project initially explored its applicability to mainly a design industry, but I believe it has a potential to be a game-changing strategy in other industries to contribute to climate change collaboratively.