Farewill is the will reimagined.

18-34 year olds make up the largest group of first time will writers. Yet wills are expensive, complicated and haven't changed much since Solon, the grandfather of democracy, invented them using the latest technology of his time, writing.

In the UK alone:
• 2/3 people don't have a will
• 95% of wills are out of date
• £150 is the average cost to make or update a will
• Only 5% of people include their friends in their final wishes
• There are £15 billion pounds of unclaimed assets per year
• Will's don't account for digital stuff

With Farewill, you can create a will in seconds, and update it any time you want. Rather than write legal text, or consult with a lawyer, users conduct a number of simple interactions which are translated into legal text in the background. Then, hit export and receive a PDF of the formal documentation, legally valid in any court in the UK today.

Inherently digital, Farewill accounts for all your digital assets too – from your Instagram and iTunes, to your Paypal and online bank accounts. While also building a network of those people who are most important to you, and allowing you to notify them whenever you leave them something.

Farewill provides guidance and help when you need it most. From complex assets and changes in legislation, to help with carrying out final wishes, including automatic digital distribution. 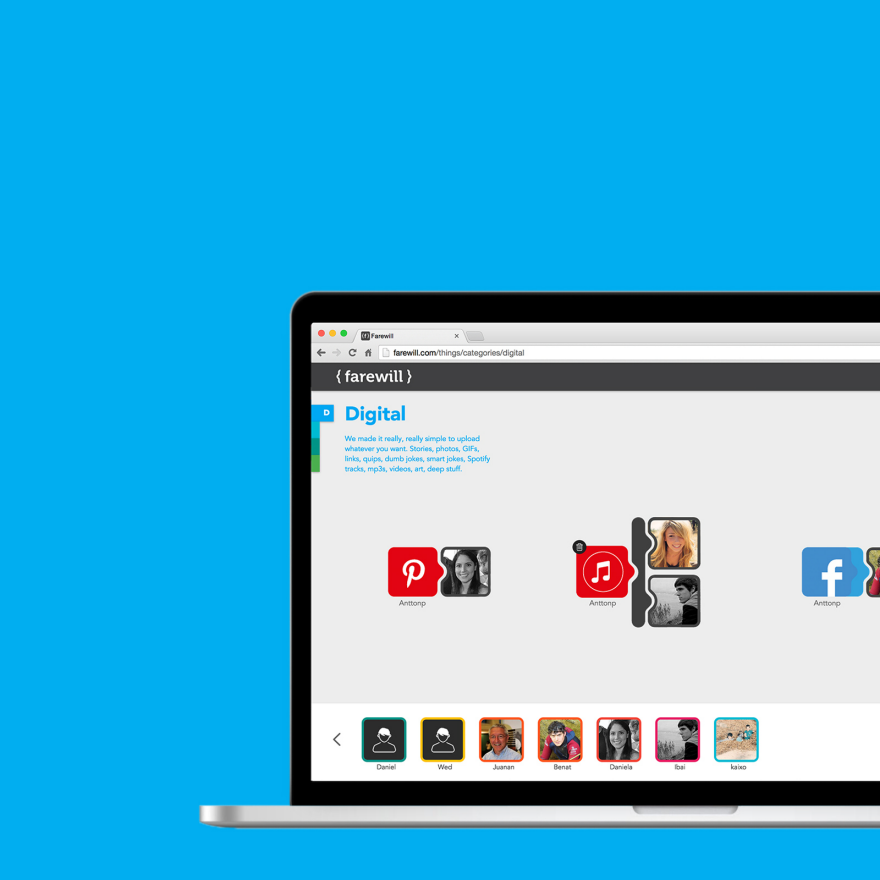 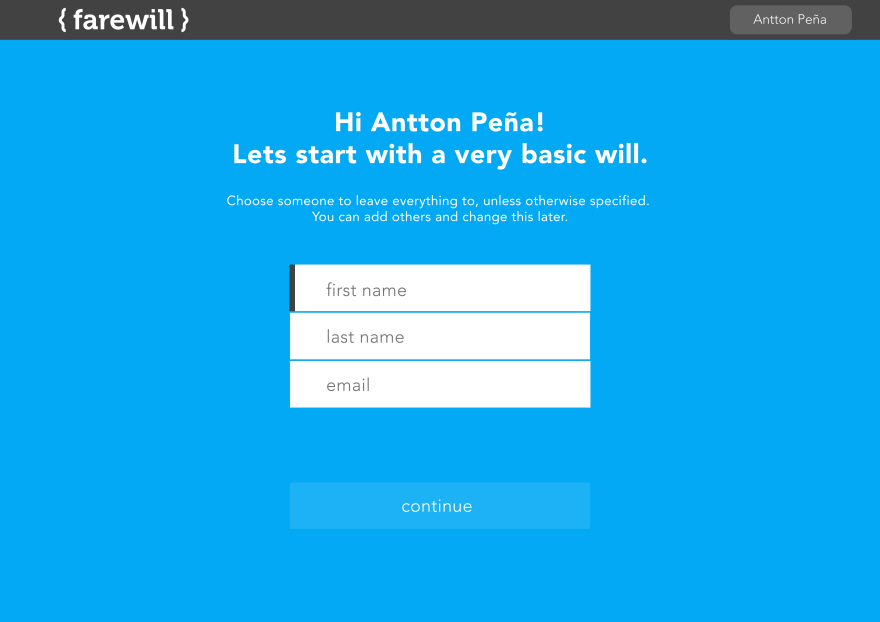 Onboarding Users generate a very basic will in seconds, and then add depth and details later. 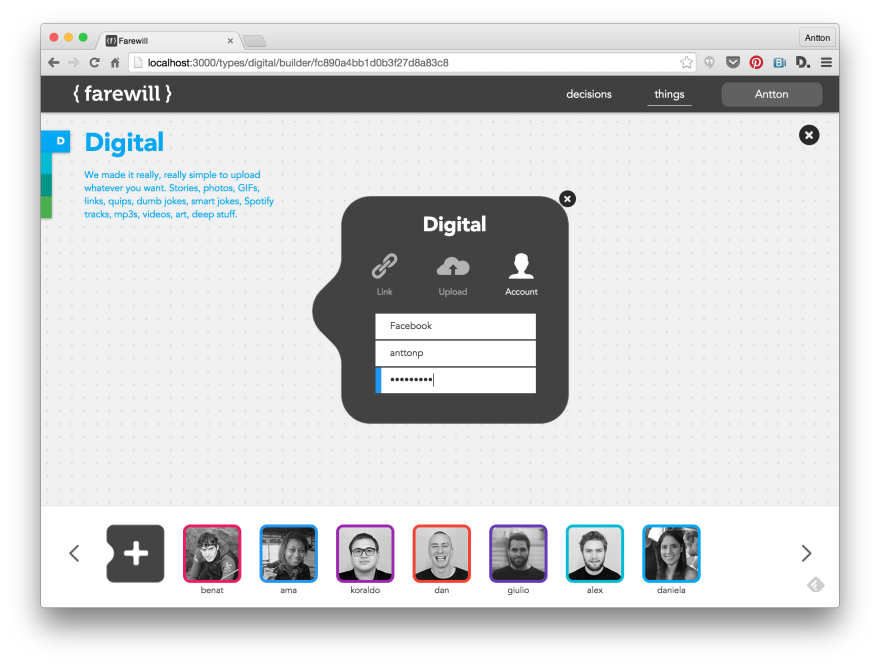 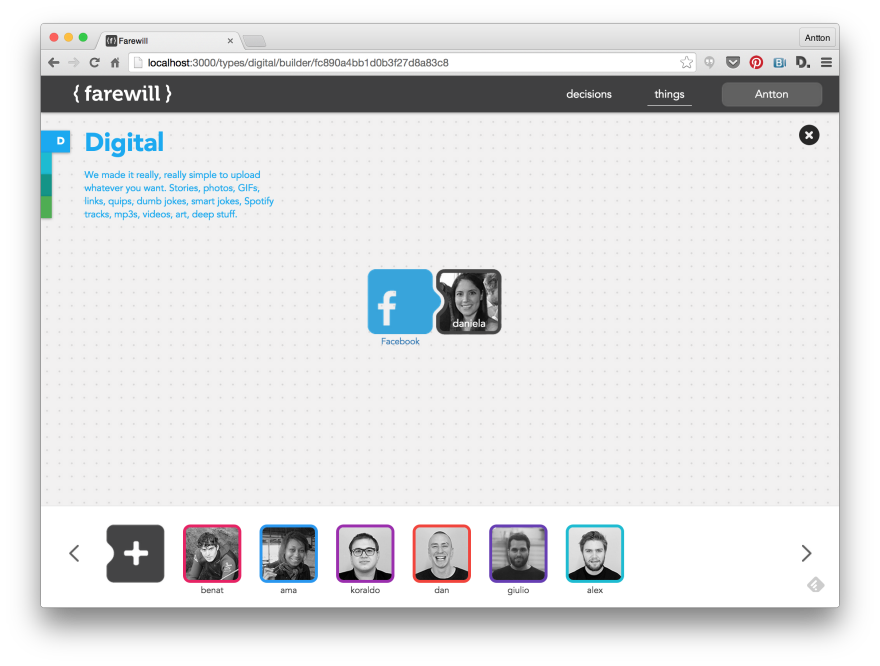 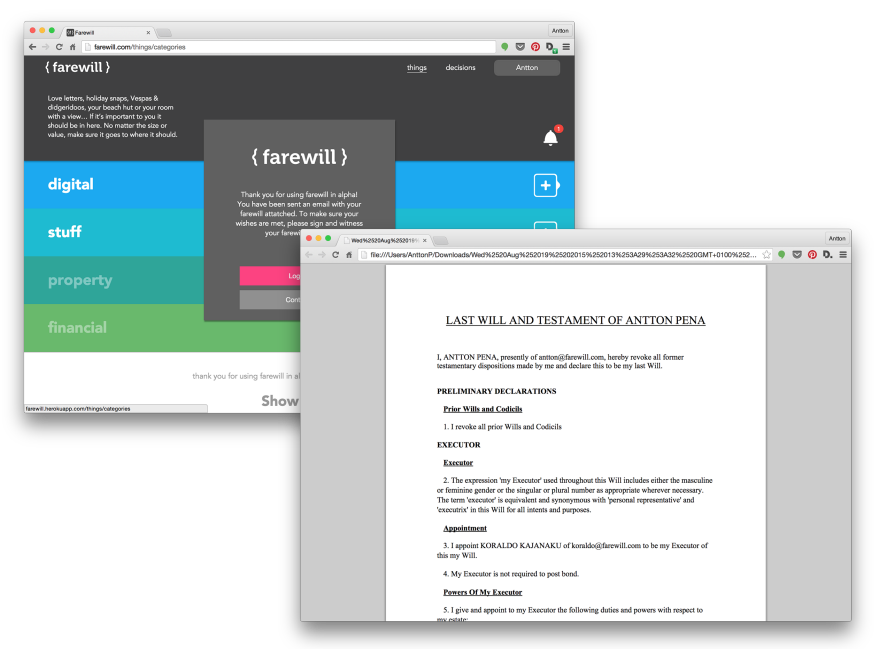 While considering a number of trendy themes for our final group project at the Royal College of Art & Imperial College London, we kept circling back to Death.

2015 started off with number of deaths in our families and faculty that affected us collectively and personally.The unpredictable nature and absurdity of it all made us question our own mortality, our legacy, and eventually led us to plan for our own end of life.

We set out, and made our wills in our three respective countries. In the States it took me nearly a week to create a 4 page document that contained a simple will and my medical wishes. Antton met with lawyers twice in Spain and still didn't have a will, and Dan's 6000 word beast, like 1 in 4 wills in the UK was legally invalid. We had found a global problem, and quickly found we weren't alone.

At 34%, millenials make up the largest group of first time will makers. 18-34 year olds buying a home, starting a family or going through some other big life change.

Wills had barely changed since the 6th century BCE. They were complicated, expensive and desperately out of date. We decided to scrap them and start from scratch. No more hassle, no more confusing text, just a simple, modern tool for saying your final farewells.

We spent the next few months researching, narrowing our scope, and getting help from incredible experts. We did end of life journey mapping, workshops, explored how religion dictated funeral practices, worked with charities like the British Heart Foundation and Compassion in Dying, interviewed lawyers, thanatologists, and Paul Bennett of IDEO. We even held a Death & Design symposium at the Victoria and Albert Museum, with 13 experts on death from around the UK.

In our research we covered the legal history of wills, and dug out will case studies spanning 600+ years from the British Library, and even looked into international law and global death culture.

Our first prototype was an html page with four fields, your name, something you'd like to leave to someone, their name, and an optional condition. It went viral and the answers ranged from deeply sentimental to extremely funny. We had broken the strange barrier that western cultures have with death, and people loved it.

We went on to develop our prototypes with continuous user feedback and even started working with government organizations in the UK to make it real, legal, and secure. We worked with Government Digital Services, the Office of the Public Guardian, the Ministry of Justice, the Department of Health, the National Health Service, the Law Commission, and the Law Society in the UK.

With the help of our friend Tom, we built a fully working prototype that we showed at our final show and London Design Week, making over 1000+ wills in a little more than 48 hours.

After graduation, due to demand from people who saw or heard about it – Antton, Dan, and Tom launched Farewill as a startup in London. Checkout farewill.com to see how Farewill has evolved post-graduation.

We thought developing a clear system of learning about and developing wills has a clear benefit to society.

It can be a difficult and emotional thing, but this project presented it in an intelligent, approachable, easy way.