URB-E is a lightweight, foldable, electric vehicle that solves the "last mile" problem of urban transportation. Machined and built in the USA, URB-E travels up to 15 mph, has a 20-mile range and folds to fit conveniently in a bus, train, or car trunk.

With 70% of the world's population living in urban areas by 2025, commuters need efficient, compact, and sustainable modes of transportation to carry them from A to B. URB-E alleviates the daily pain points of urban commuting by linking city dwellers to transportation hubs efficiently and effectively while eliminating the need for parking, sitting in traffic, paying for gas, or squeezing an unwieldy vehicle onto public transit.

URB-E is machined and assembled in California out of American-produced aircraft grade aluminum and lightweight carbon fiber. This allows it to weigh only 35 lbs while remaining safe and sturdy enough to pass even the most stringent durability tests.

The vehicle runs on an advanced 36V lithium ion battery and an ultra-compact 250W brushless motor. From dead, the battery charges fully in 4 hours. 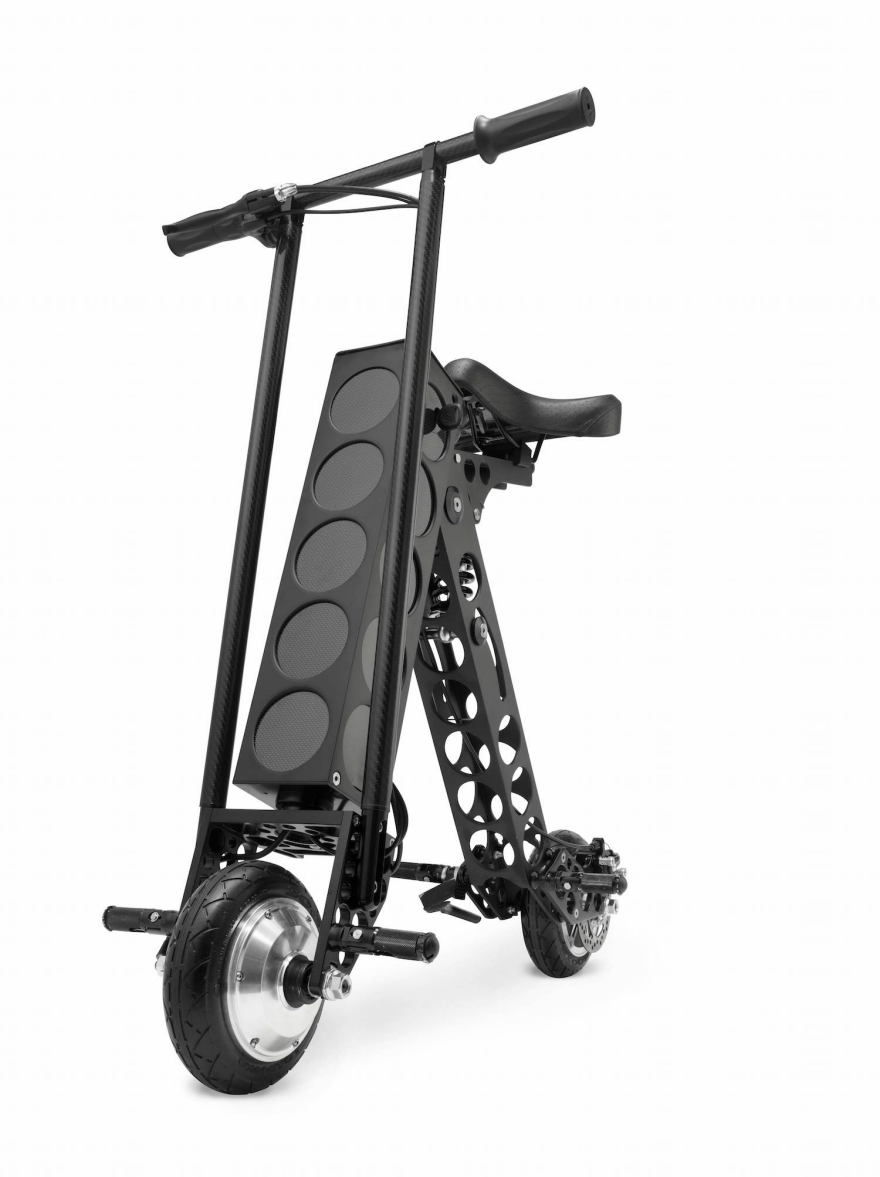 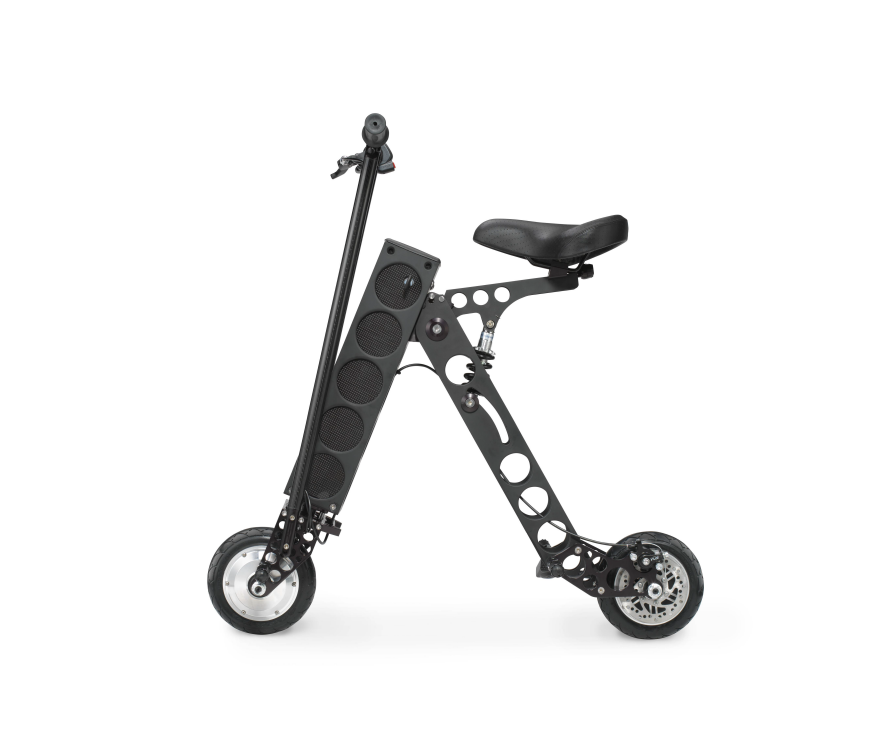 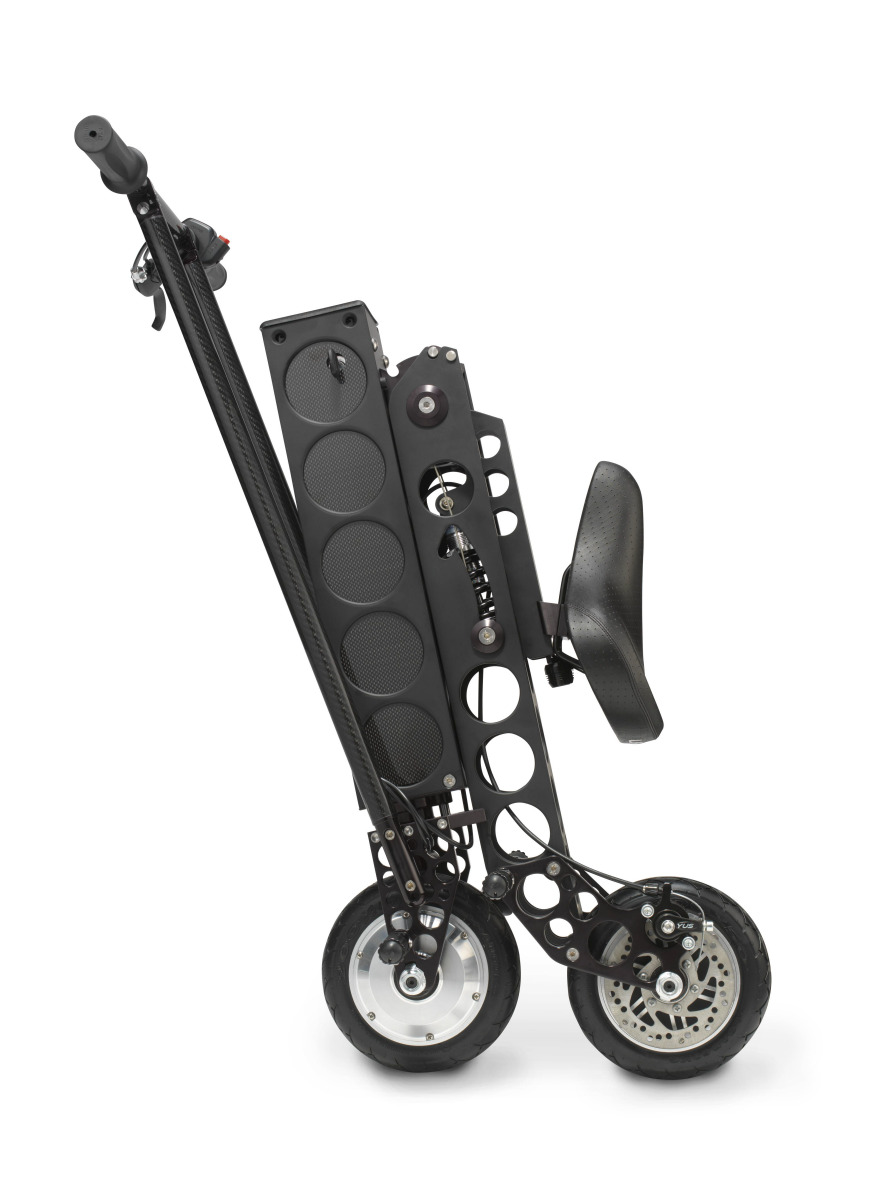 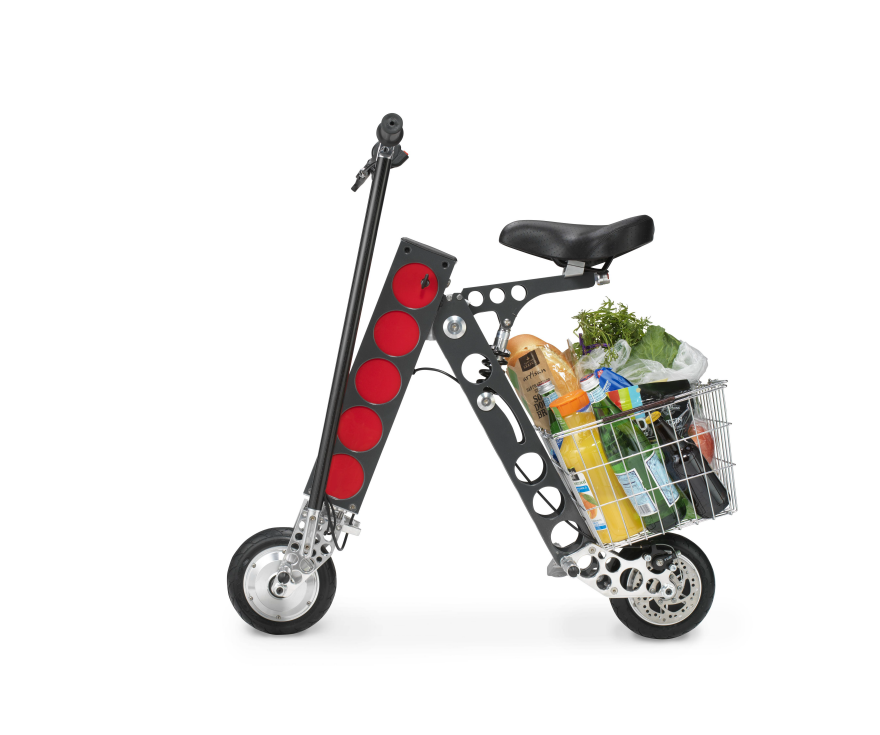 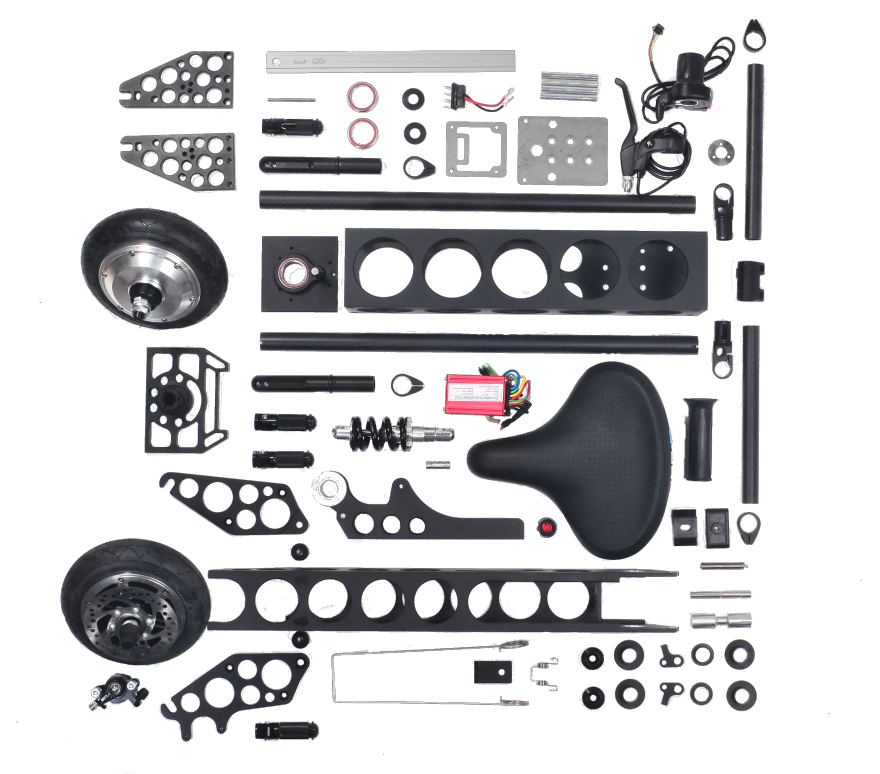 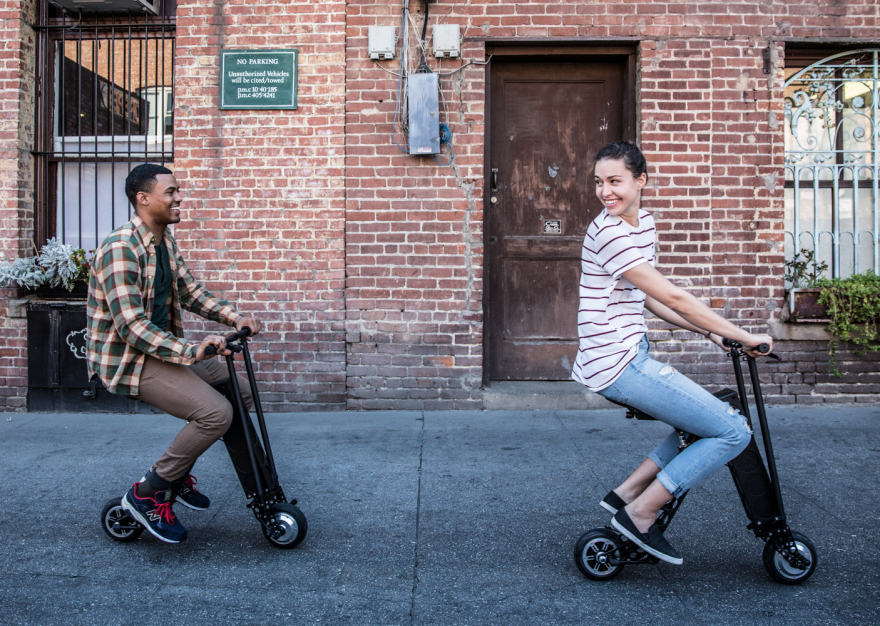 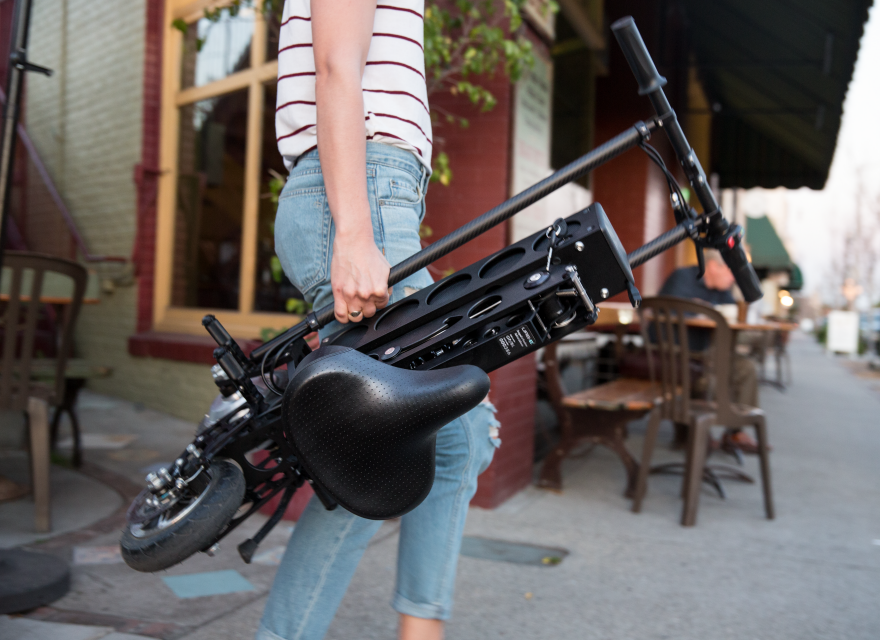 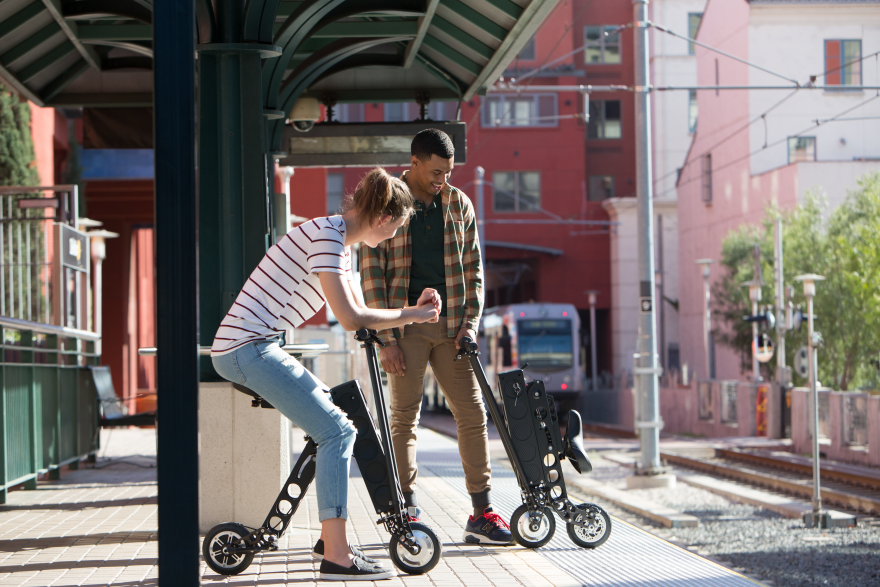 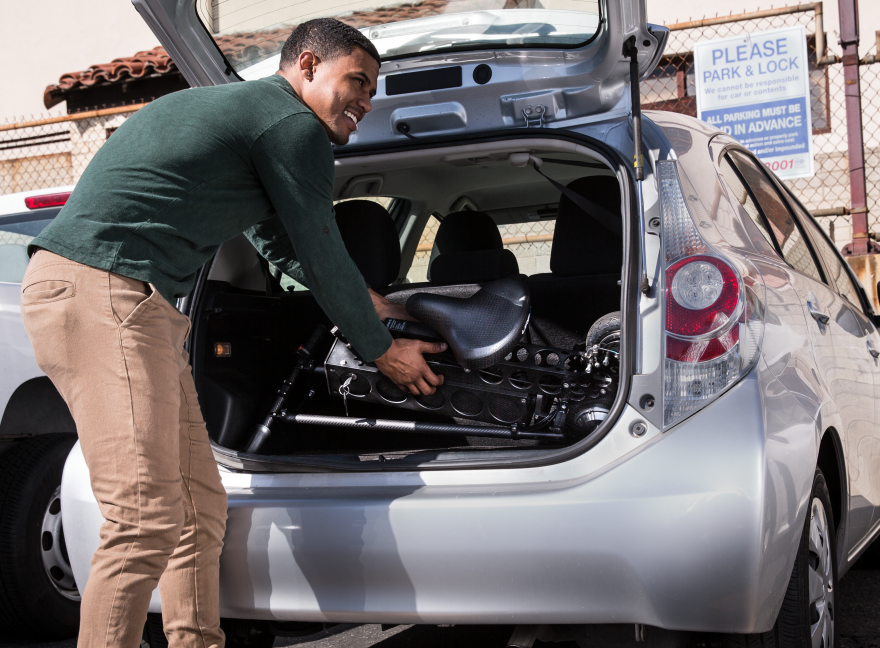 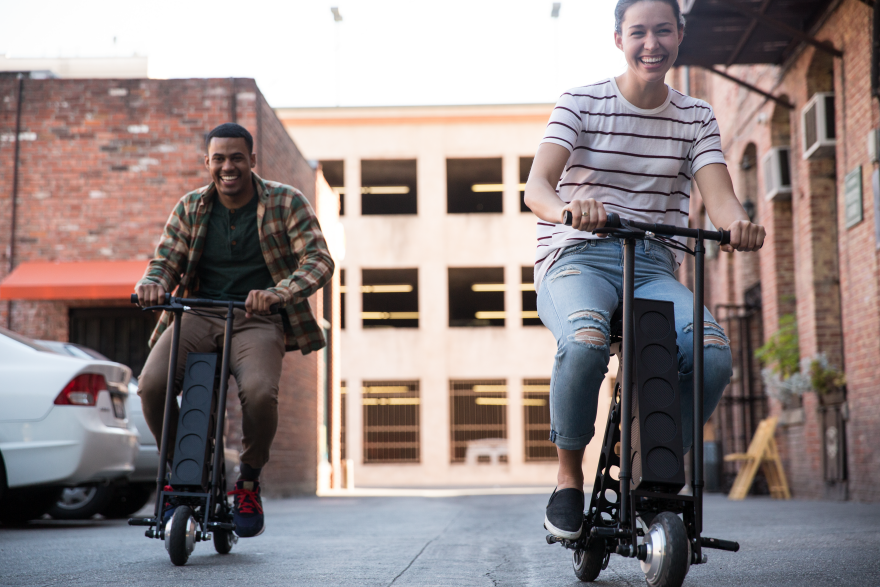 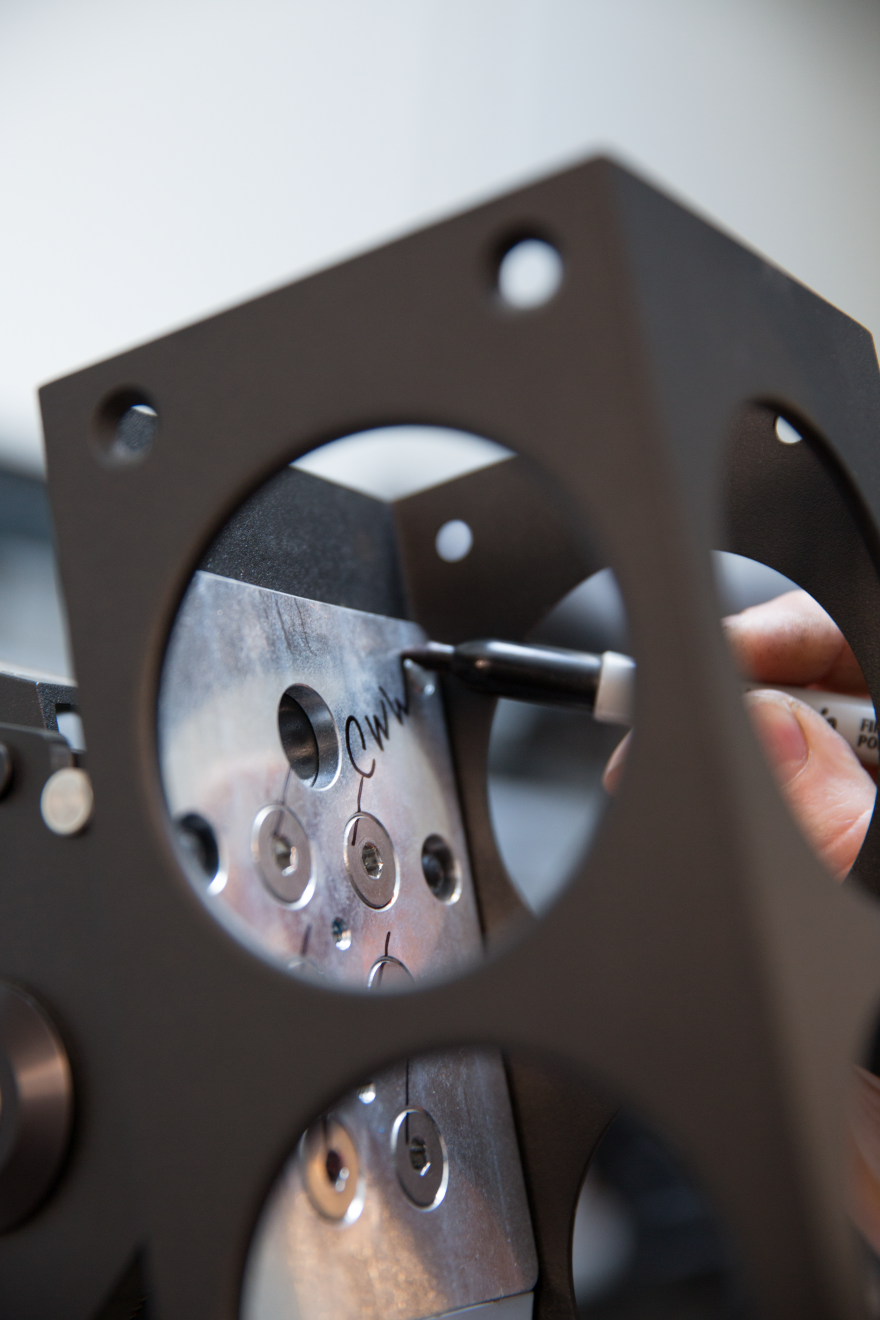 Grant Delgatty was teaching at Art Center College of Design in Pasadena when he began to become aware of a growing trend. Millennials were no longer purchasing cars as did previous generations, but instead, were choosing to take public transportation or alternative forms of transportation to move in and out of cities. The problem he saw, however, was the ability these commuters had in getting from the bus or train station to their final destination. He realized there was no vehicle on the market that was both easy to take on the bus or train and powerful enough to handle the challenges of urban commuting.

This problem didn’t just exist in Pasadena; there was a global need for lightweight, compact vehicles to solve the “last mile” problem in city commuting. According to a recent Nielsen study, 62% of young people worldwide prefer to live in urban centers, and 42% would prefer to live car-free. This indicates a shift towards urban living among young professionals. With 70% of the global population likely to live in cities by the year 2025, the world needs a vehicle versatile enough to alleviate the pain points of urban living, everything from expensive parking to traffic to commutes involving multiple modes of transit.

Grant began prototyping the URB-E from his garage, focusing on building a vehicle that would be easy to fold and carry, simple to ride, and sustainable. He eventually partnered with Sven Etzelsberger, who had previously worked as a lead engineer for Porsche, Fisker, and Saleen supercars. Sven’s expertise brought URB-E to a new level of quality as he and Grant worked to marry the best of engineering and technology with the best of functional design.

In late 2014, Brad King and Mark Kim joined the URB-E team with early-stage funding and the financial and strategic expertise. With their help, and the addition of CEO Peter Lee, the company was able to go from idea development to scalable production. The first URB-E units became available for sale in August of 2015. Currently, URB-Es can be purchased in our storefront in Pasadena, CA, on our website, and on Amazon Launchpad.

URB-E spent nearly three and a half years in the research and development process. When materials from overseas proved sub-par, URB-E’s production moved entirely to the United States. The URB-E body is machined in Southern California to ensure quality and consistency, and each unit is assembled by hand in our Pasadena workshop. Before an URB-E leaves the shop, it is subjected to a 46-point quality control inspection and signed off by one of our production professionals.

The patented URB-E frame is constructed of 6061 aircraft grade aluminum, and the handlebars are made from lightweight carbon fiber. All material not necessary for transferring force has been cut away, resulting in URB-E’s signature circular holes. This allows URB-E to weigh only 35 lbs without sacrificing any structural integrity. To test this, we sent URB-E to an independent facility for stress testing. After 100,000 repetitions of the most stringent tests, the vehicle showed no signs of structural wear.

URB-E’s patented swing arm was designed to make the vehicle as versatile and easy to use as possible. Deceptively simple, this complex piece of engineering allows URB-E to fold to the size of a golf bag in a single motion and lock into place in less than a second. It is the only folding vehicle on the market that collapses so quickly and easily. It unfolds in a single motion, as well, making it ideal for transitions between street riding and additional modes of transportation. This is a marked difference between URB-E and standard bikes, e-bikes, folding bikes, and Segways; the latter are all too big, to heavy, or too complicated to fold for easy use in conjunction with trains, buses, and other motor vehicles.

URB-E is designed for a sustainable future. It is fully electric, powered by a 36V lithium ion battery that plugs into a regular wall outlet. The URB-E battery charges completely in 4 hours and has a 20-mile range on one charge. Each battery is built with a battery management system that shuts the unit off if it draws too much power. This keeps the battery from overheating and helps to preserve battery life over time.

Accessibility to different riders has been an important part of URB-E’s development. Eliminating pedals allows URB-E to be ridden by professionals in work attire and by commuters of all ages and levels of mobility. To make URB-E’s price point more accessible, URBAN626 worked with Wells Fargo on a financing plan that allows riders to pay over time. With financing, URB-E can be more cost-effective than paying for gas or parking.

Our audience began with urban commuters, but it has since expanded to enterprises, real estate developments, and municipal institutions. Businesses, hotels, and real estate developments have found that URB-E allows them to travel between offices and external destinations efficiently and sustainably. We have developed an URB-E docking station that supports a vehicle rental program, which is in use at multiple locations with great success.

URBAN626 is also working with the Los Angeles Metro in its pursuit of a “last mile” commuting solution. We have presented URB-E as a sustainable option for commuters and enterprises at multiple Metro events, and are continuing to discuss ways in which URB-E can support LA transit solutions through rideshares or similar programs. We envision URB-E as a vehicle that transforms urban transportation on an individual and organizational level, and we are committed to working with cities and organizations worldwide to make that a reality.

The URB-E body is designed to be innovated on. While URBAN626 sells a number of accessories on its website, we encourage owners and designers to come up with their own additions to make URB-E the perfect vehicle for their needs. We are currently working with our innovative customers on a small scale, but we envision providing a support network for URB-E accessory designers as their numbers grow.

Clearly the product of much thought and refinement. Lots of lovely parts and apparent production engineering.