Parsons The New School for Design

HugMatch is an interactive toy for 2-5 year old visually impaired and non visually impaired children. It stimulates the senses that develop at this age. Children are entertained by toys made with different fabrics and toys that can make sound. They will learn how to communicate by touching and hugging HugMatch, which provides a variety of textures for the children to feel.

With this toy, children will learn how to socially interact, communicate their opinion, compromise and cooperate with each other. Providing an interactive environment will give them a chance to create their own rules, which is a better way to nurture their use of imagination. 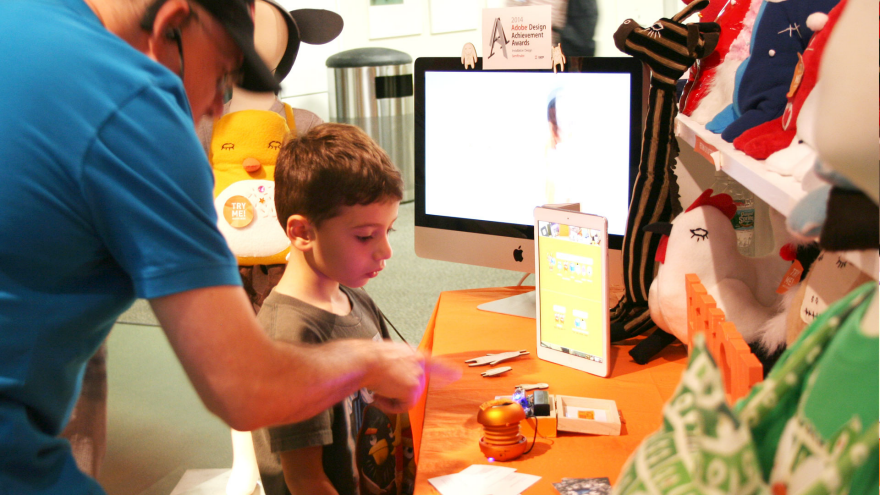 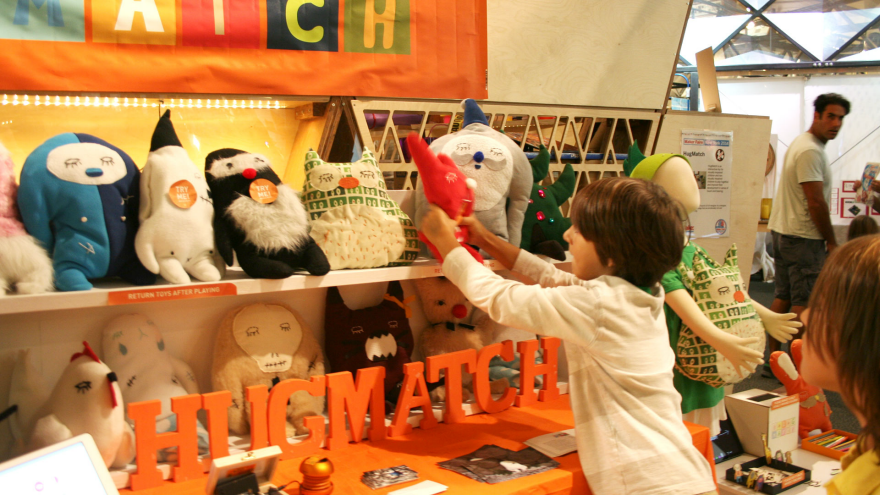 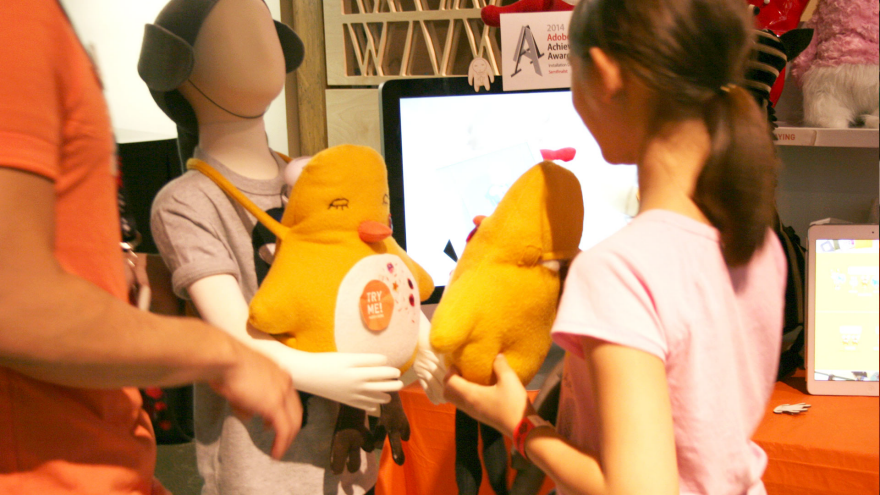 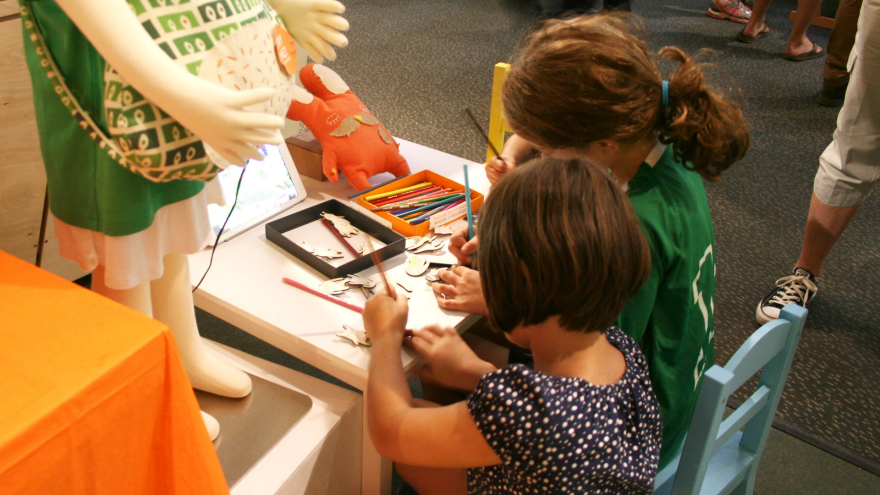 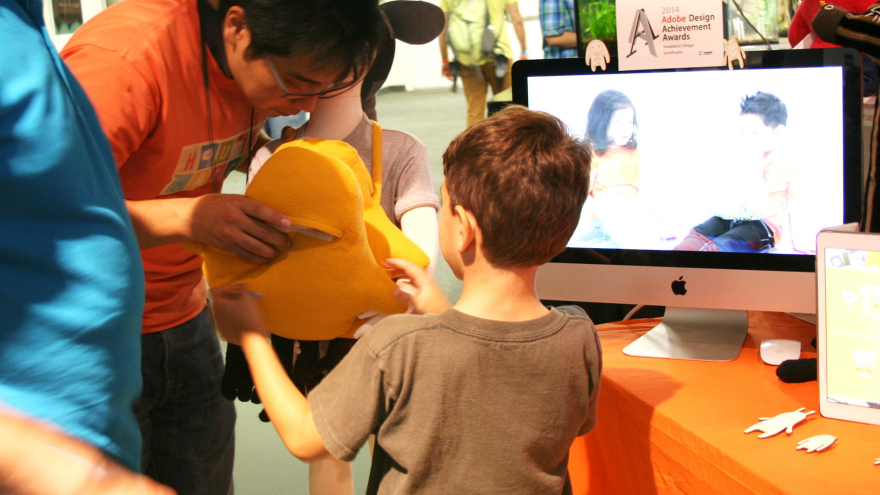 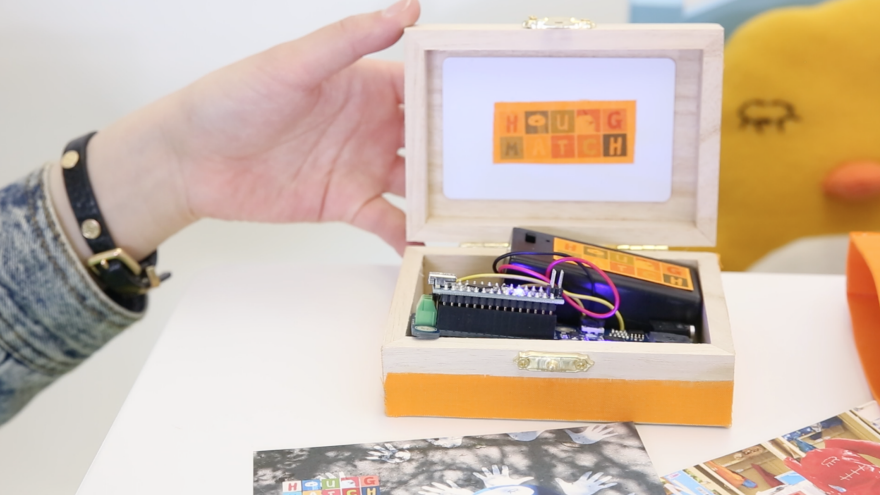 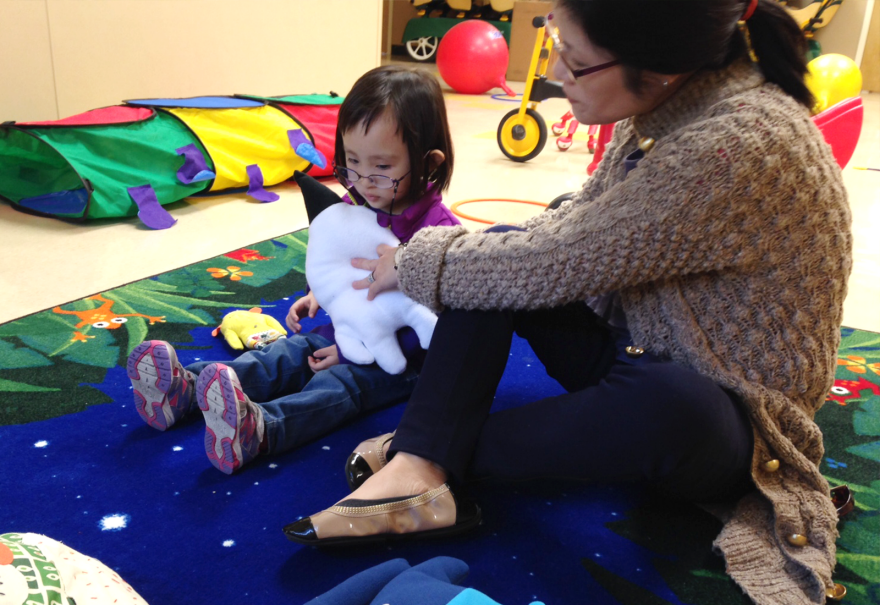 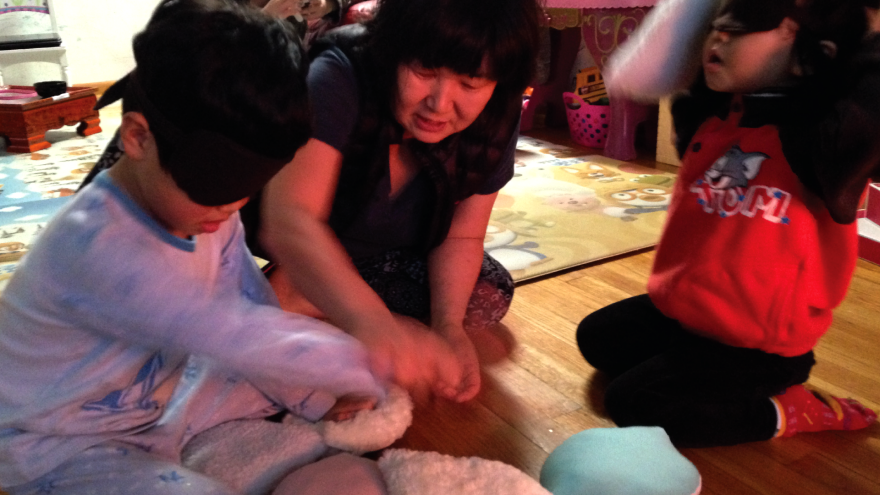 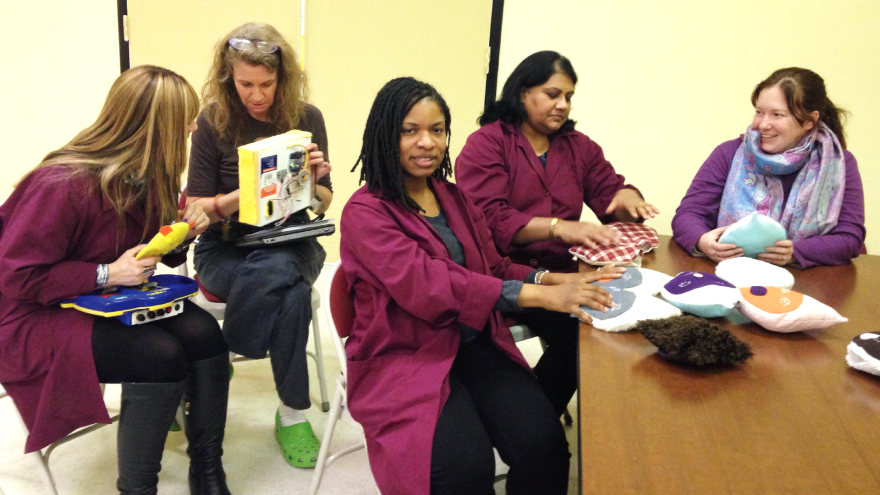 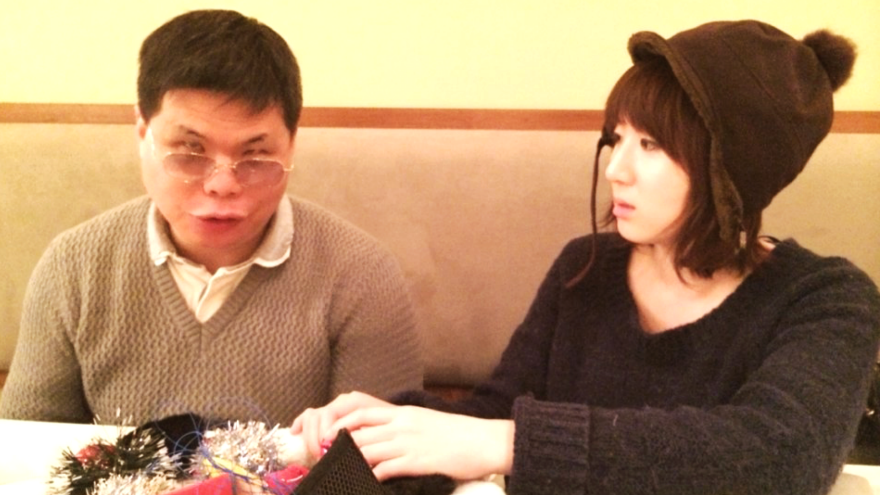 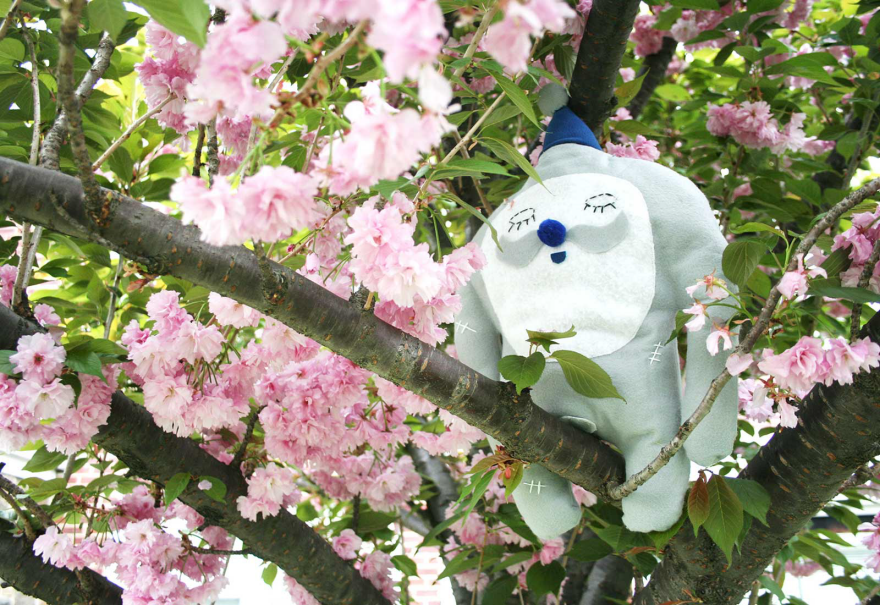 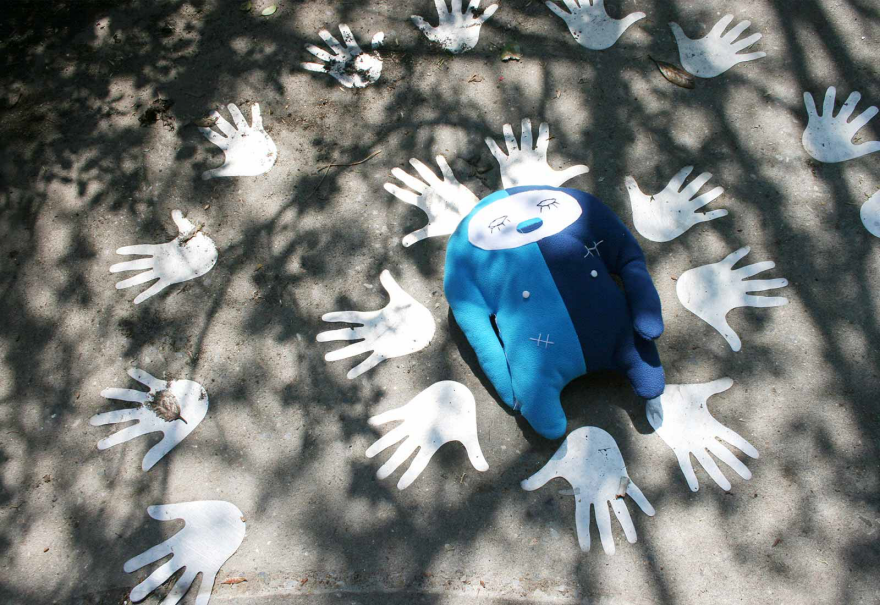 Many people live with different types of disabilities. They are limited by their impairment in many ways and these limitation can be the cause of them getting emotional/mental disorders. The level of stress and difficulty of the limitation depend on the form and complication of the impairment. Above all impairments, visual impairment and disability that require wheelchair can cause most stress and complication. People with these impairments are challenged everyday with everything from accessing to information, mobility, eating and using bathroom. These difficulties limit their chance to experience and connect with society. Other difficulties also include discrimination and unwanted attention from people.

Since I grew up with an Uncle who has a disability, I know how difficult it is to be disabled and the kind of discrimination you have to endure as a disabled person. I always aspire to create something that is emotionally rich and grounded in meaning as a designer. I try to keep myself passionate in assisting someone who is in need of help. I also believe that inspiring surroundings can have positive effect on its people’s lives.

“Why do kids love toys so much? What is it about a toy that makes a child’s cry stop?” To get an answer, I researched and found this interview. The reason kids love toys is explained by an education and development expert as “They are teaching themselves.” When you take a look at the history of toys, toys are not an invention of our civilization but they are a form of tool that fulfill our instinct in play and study.

HugMatch is a game where visually impaired and non visually impaired children can play together under same terms. Participating children must wear eye masks. Through HugMatch, they will learn how to distinguish objects by touch and sound. They will learn social interaction that can help with their communicating skill. They can also have physical activity by moving their arms.

Between 2 and 5 is when sense of touch on fingertips develop the most. After the age of 5, the sense becomes dull and is hard to develop. With HugMatch, they can stimulate their sense of touch and learn how to distinguish different sounds. Children with visual impairment will learn how to identify objects using senses other than sight. HugMatch can help children to open up, communicate with people and try to challenge themselves with other games. When children lose their sight through an accident, they can have much harder time than those who were born without sight. This game should be useful for them, developing other senses through playing and having a fun time.

HugMatch makes children use their sense of touch and hearing. They have to hug the doll to communicate with it. One child or 2+ children can play. Instructions are: 1) Children wears doll bags with different sensors. 2) Child uses their sense of touch and hearing to find the matching dolls. 3) When a child thinks he/she found the right doll, he/she will hug to doll. 4) If doll matches, it will say “You did it”, If doll does not match, it will say “Try one more time” with vibration. 5) If a child found the right doll, he/she can help a friend finding the right doll.

To observe people’s reaction to HugMatch, I visited Kiddle Preschool in Flushing, New York. With the help from their speech therapist, I was allowed to film a video on my second visit to their preschool. I met a four year old visually impaired child from the school. He had limited vision and some mental illnesses. When I visited the first time with different prototypes, she was most interested in the fourth prototype, the Record Doll. She was not interested in other prototypes but he was curious and excited to hear his own voice with the Record Doll. I believe he was careful around me because I was a stranger at the preschool. The speech therapist suggested using more variety of differently textured fabrics. She said the children are interested in toys that are familiar to them and they choose one to be their special friend.

After spending an hour with the children, I visited Kiddle Preschool again two weeks later as suggested by the speech therapist. For a friendlier approach to the children, I brought back a background story for the toys. The speech therapist read the children the story book before letting them play with the toys. After the story time, it seemed like the children acknowledged that the toys they are playing with are from the story book. Their reactions were completely different from the first visit. The children picked the toys they liked, shook them to listen to the sound and brought them to the speech therapist. Due to their mental illness, they were not able to concentrate as I thought and did not acknowledge the instructions. But the fact that they seeked and chose the dolls they liked was a big development. When the children are playing with new toys, 10 to 20 minutes is the average span of concentration. I believe the toys could be good friends to the children when they spend a long time together.

The participants to the user tests were two blind children, four children with limited vision, a physical and occupational therapist, a speech pathologist and a teacher for visually impaired children. Through a presentation, I explained what I have researched and why I made the prototypes. Then, I showed the story book and let the participants play with the prototypes accompanied with an instruction. Feedbacks from the teachers was that the sound of the sensor was too quiet and it was hard to hear the music. The dolls were better than the clothes, and each doll should have different distinctive feature so the children can find the features by touch.

The four blind children showed most interest in the snow toy and liked touching its button. They constantly listened to the sounds the toys made and enjoyed touching different types of fabric. It took them more than two minutes to find the matching toys. Children with limited vision took 30 seconds to find the matching toys and they showed most interest in blue dot and skull dolls. Testing the new toys with the teachers at their facility was a big help. I confirmed that there is a potential for HugMatch after seeing the children’s reaction in person.

A wonderful application of play to build empathy between children who have disabilities. It was a really well considered approach to designing and testing with kids.

Looking at how play and a toy could be used to build empathy with two kids. It was nice to see that as the research unfolded and multiple visits were had with the children... those insights were nicely incorporated into the design iterations of the toy.