Fewer than 2,000 working ventilators serve hundreds of millions of people in 41 countries across Africa, compared to over 170,000 in the US alone. When hospitals are overwhelmed with patients requiring assisted breathing, they receive substandard treatment which costs lives. Limb-O2 is a passive, multi-patient attachment for medical ventilators that allows up to four patients to share a single machine safely. For under $800—using standard components and one novel, 3D printed part—the product allows medical facilities in developing nations to increase their capacity by 300% and serve their populations by simply plugging into an existing ventilator.

One standard ventilator can provide enough air to support four to six patients. Limb-O2 leverages this feature to support up to four patients using a single ventilator, each receiving a volume of air that is within the UK government's Medicines & Healthcare products Regulatory Agency (MHRA) specification for a Rapidly Manufactured Ventilator System (RMVS).

The product has two configurations: one for the Inspiratory Limb which helps patients inhale, and one for the Expiratory Limb for exhalations. A novel, 3D printed four-way air splitter equally distributes the volume of oxygen being outputted by the parent ventilator during inspiration and converges the air expelled by four patients into a single input after exhalations.

Limb-O2 is ideal to treat rapidly spreading pandemics and to relieve other disasters, such as forest fires and earthquakes, or incidents such as the Las Vegas shooting in 2017. The low price and utility in a variety of unpredictable emergencies makes the device a cost-effective and potent addition to a regional or national stockpile.

The full Limb-O2 system costs under $800 for up to four patients, compared to the typical $5,000 to $50,000 price tag for a device catered to only one patient. For countries such as Mali and South Sudan, this could be the difference between having family members—who would otherwise have been refused a ventilator—at the dinner table and not. 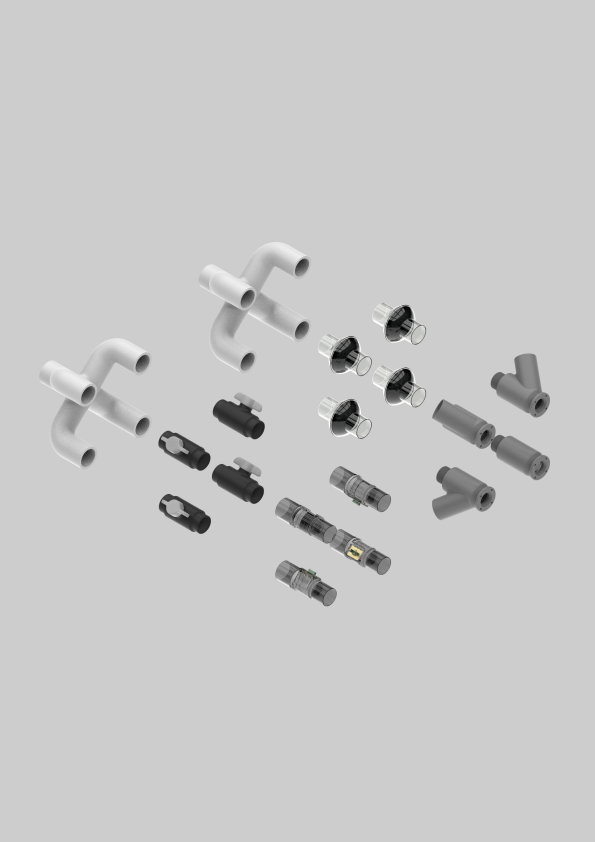 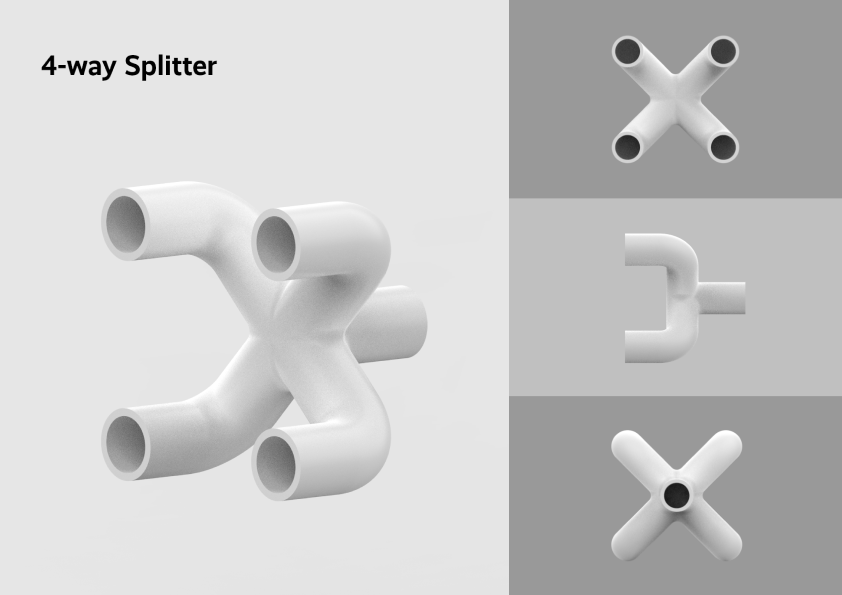 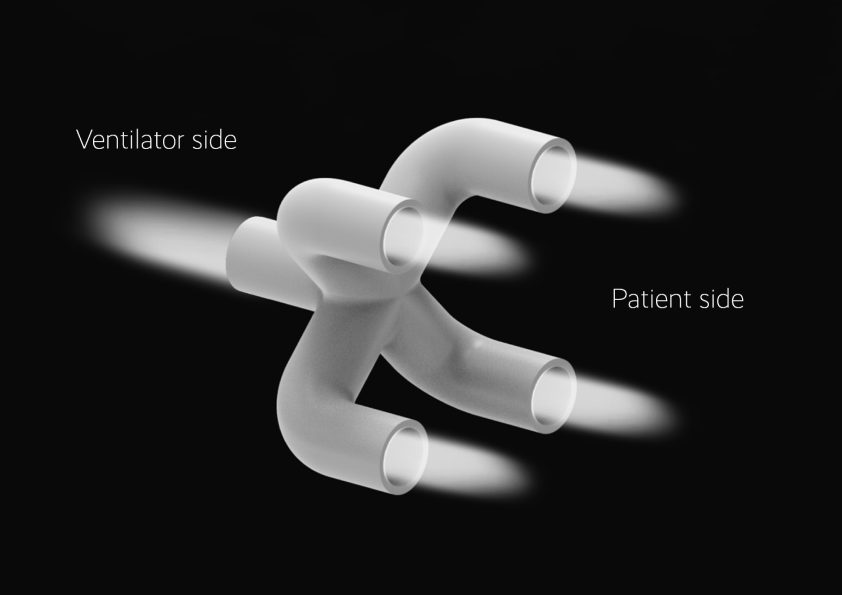 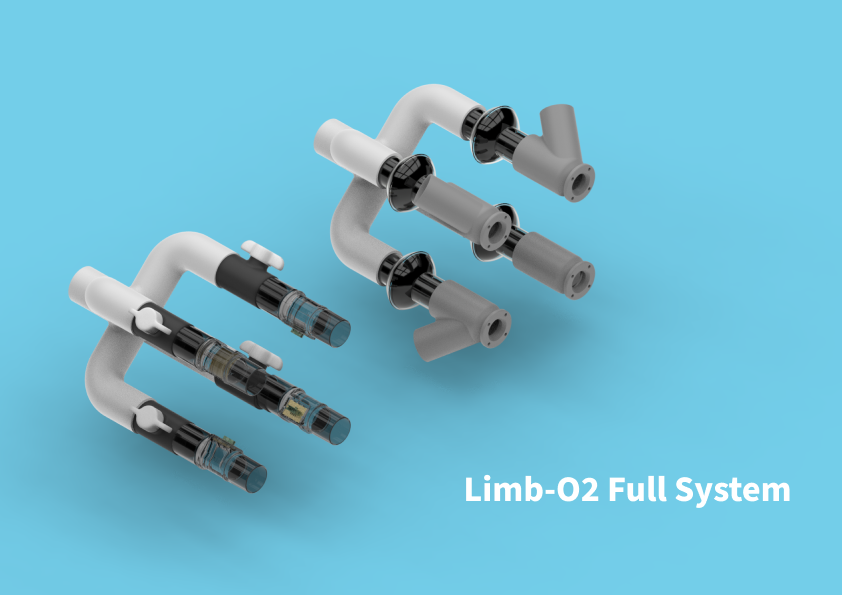 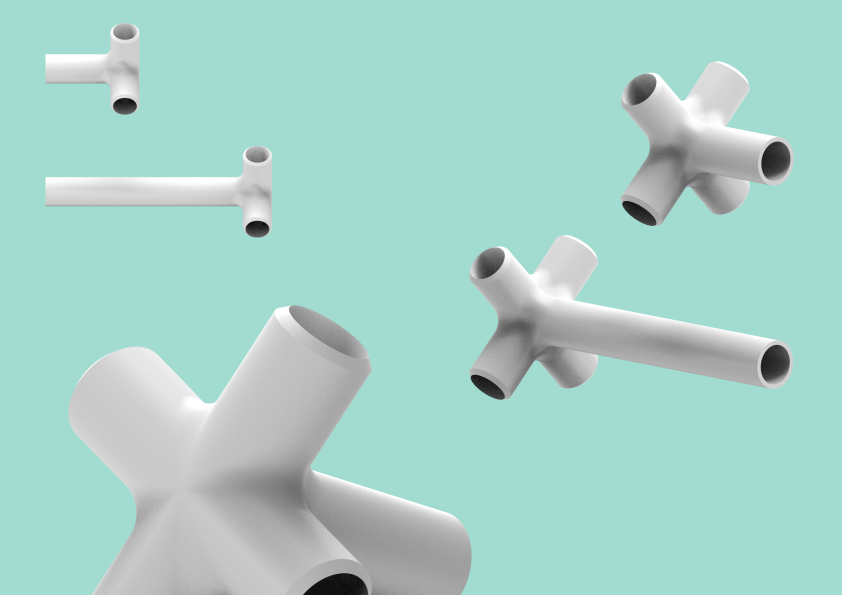 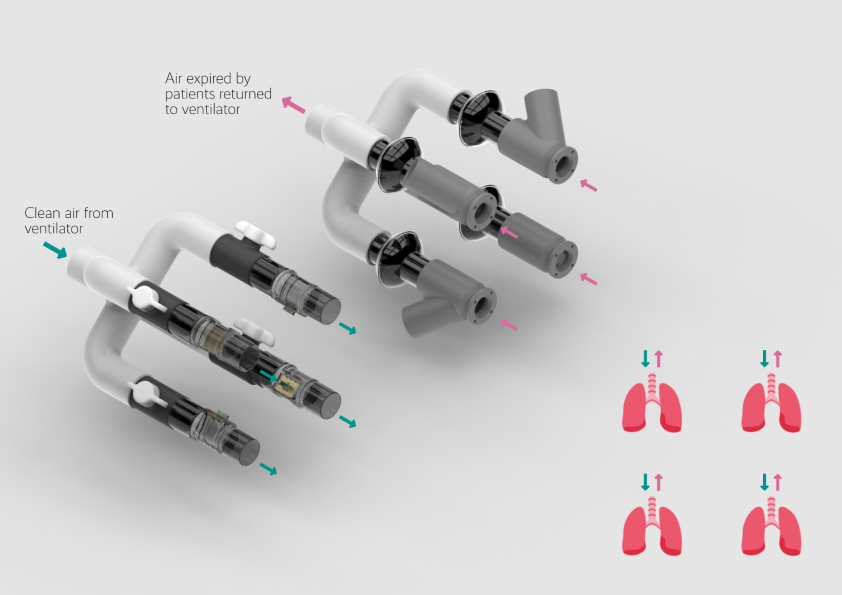 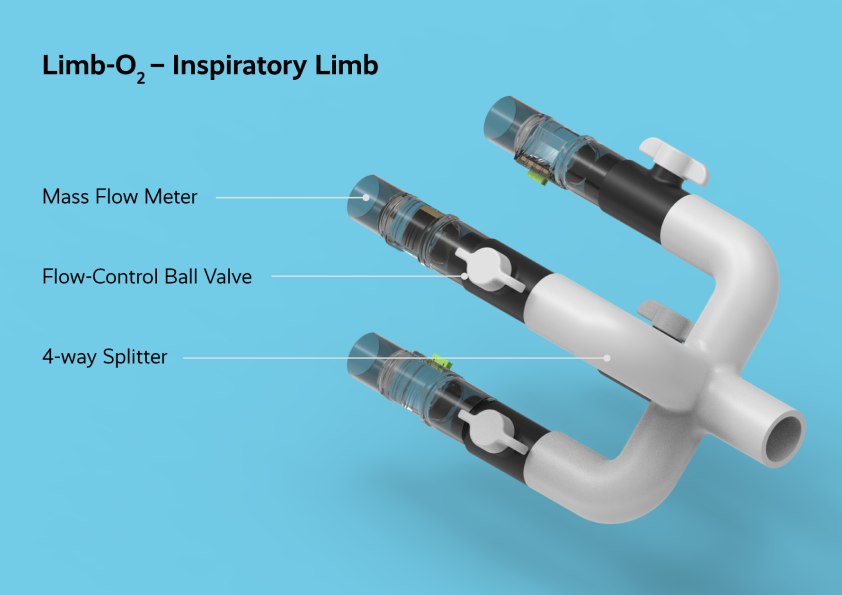 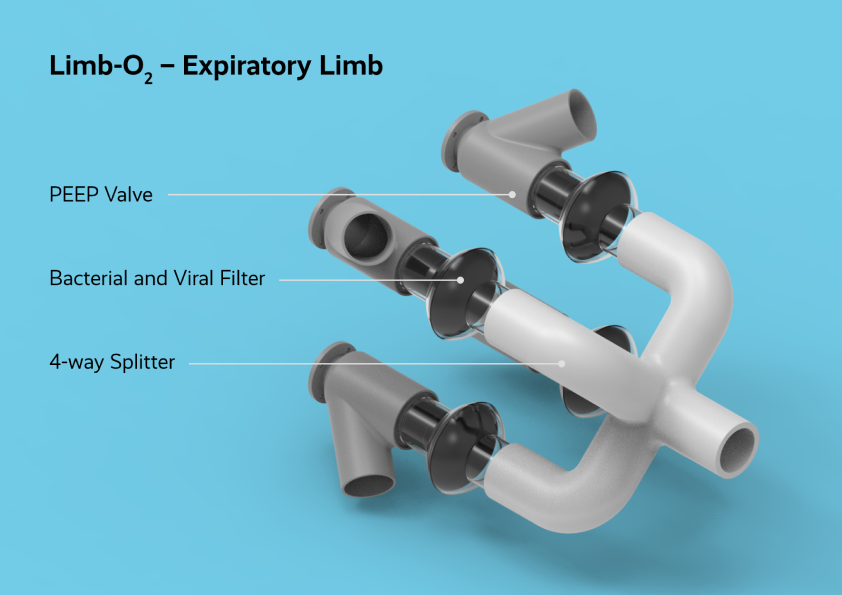 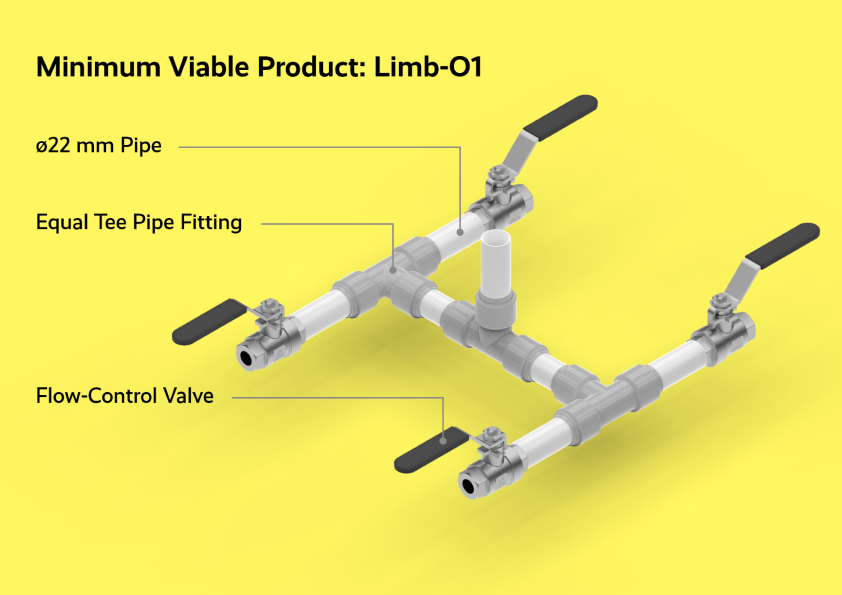 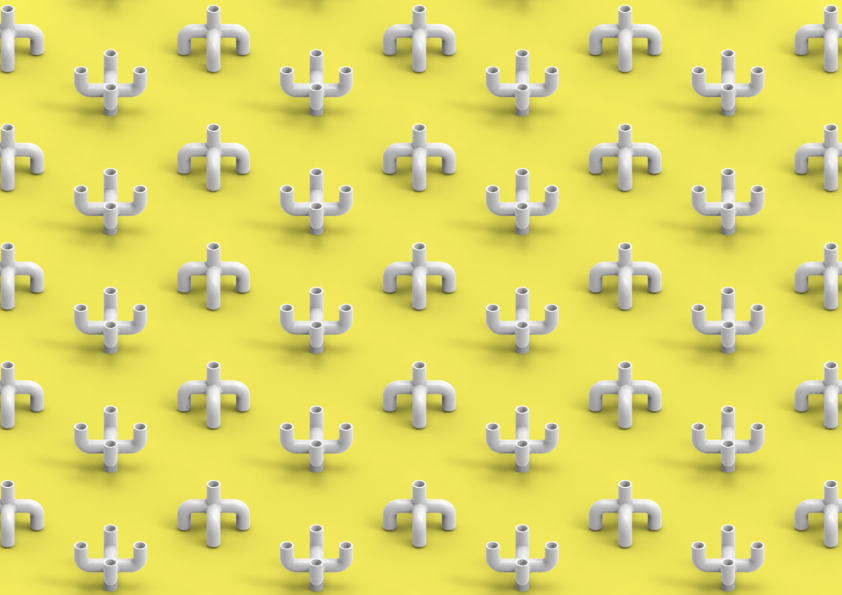 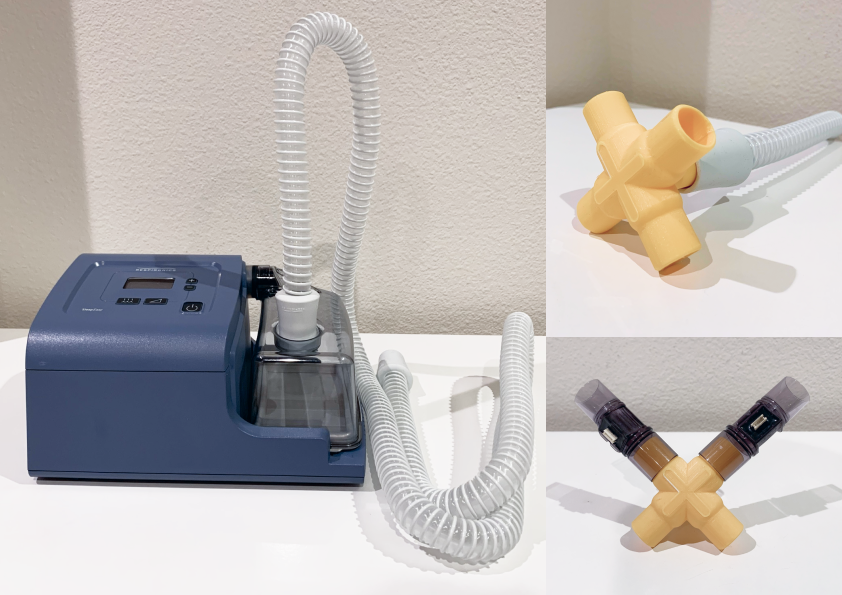 There is no reason to believe Coronavirus will be the last case of a deadly global pathogen. Although scientific communities viewed a pandemic as an inevitability, nations around the world were unprepared for COVID-19. The Limb-O2 project began after students from the University of California, Berkeley's inaugural Master of Design program, and Loughborough University's Product Design Engineering program caught up on the phone during lockdown in 2020 to discuss how they could support the call for additional ventilators using design.

The team came across a research paper published by two MDs in 2006 for the Society for Academic Emergency Medicine which had successfully proven that, in a catastrophic situation, simple modifications could help multiple patients share a single ventilator. The design had limitations such as the lack of control over the volume of air received by each patient and possible cross-contamination, which was particularly important for COVID-19. The team sought to address these limitations and design a low-cost, rapidly manufacturable ventilator sharing system.

All components, save for the four-way splitter, are available as medical-grade, off-the-shelf standard parts, thus reducing the delays associated with gaining medical approval. The connecting interfaces have 22 mm push-fit ends allowing the parts to be connected to existing ventilators, and to each other, by hand. This makes Limb-O2 quick to implement in underserved communities in the event of an emergency to allow a greater number of patients to receive assisted breathing.

Limb-O2 is not a replacement for traditional ventilators but a complement. While less desirable than individual ventilators for each patient, Limb-O2's lower cost and rapid implementation can provide care to a greater number of patients during emergencies. Limb-O2's ability to increase the capacity of existing ventilators by up to 300% relieves medical staff from making choices about who gets a ventilator. After an eye-opening conversation with a disaster relief organization named Brink assisting developing countries in Africa, the team was motivated to minimize complex technology using passive systems that didn't require much, if any, power to operate.

A flow control valve connected to a mass flow meter in the Inspiratory Limb allows the volume of air to be regulated for each patient based on their lung capacity and the severity of respiratory damage. In the Expiratory Limb, a medical-grade Positive End-Expiratory Pressure (PEEP) valve, placed near the patient, maintains pressure during exhalation to prevent lung collapse. Bacterial and viral filters for each patient prevent contaminated air from entering the ventilator. PEEP valves are available in disposable and reusable variants, whereas the filter is to be disposed of after each use. The disposable components cost less than $13 per patient.

Limb-O2 gives hospitals an increased operational capacity to treat non-critical patients. These patients can share one device, freeing up ventilators in a medical facility for critical cases with a greater need for an individual ventilator. In the event of a future surge in demand for high-tech ventilators, Limb-O2 can also be used as a stopgap measure to buy manufacturers more time to work through bottlenecks, such as those experienced during the infancy of COVID-19.

The system uses a minimal amount of material and plugs into existing ventilators, thus reducing, or even eliminating, the need for a power source. Manufacturing of the simple, 3D-printed splitter can be decentralized to further assist in rapid deployment across nations.

After a string of rejections from institutions due to laboratory closures, and isolated efforts at universities to build their own low-cost ventilators, the team decided to take matters into their own hands and created a prototype using plumbing equipment and balloons to simulate lungs, and connected it to a vacuum cleaner to provide an air supply. This proved that it was possible to regulate the air received by each patient.

A proposal was submitted to the FDA for Emergency Use Authorization (EUA) who responded positively asking the team to carry out some additional tests. Sensirion, a leading supplier of sensor solutions, provided four sample mass flow sensors free of charge for the team to carry out tests. We received a green light from anesthetists in the UK and India and the team has recruited more designers and engineers to develop the product further. Limb-O2 was also launched as a Capstone project for an MSc Design Engineering student at Loughborough University in the UK in December 2020.

For the next iteration of Limb-O2, the team is working with a hospital in Guadalajara, Mexico which is keen to deploy the ventilator attachment to help deal with Chronic Obstructive Pulmonary Disease (COPD), which is a chronic lung condition that obstructs airflow to the lungs and makes it difficult to breathe. Experts from the American Association for Respiratory Care, University of Kansas Medical Center, Stanford Children's Hospital, and UCSF Health's Respiratory Care Services are mentoring and collaborating with the team.

Speaking with Lisa Trujillo, Program Director and Associate Professor at the Department of Respiratory Care and Diagnostic Science at the University of Kansas Medical Center, the need for Limb-O2 was underscored especially in African countries such as Ghana, Ethiopia, Kenya, and Tanzania. The populations in these countries cook food using solid fuel sources like coal which contributes to COPD. There is a persistent shortage of ventilators that needs to be addressed and Limb-O2 could be the solution to this problem.

Some grant funding that the project received was used to acquire sensors and valves to test the circuit designed to split a ventilator. The primary challenges are to do with leakages within the system and understanding the ethical implications of four patients sharing one device in the event of a total system failure. The team is following stringent guidelines and is planning to go through a medical device regulation process to ensure that patient safety and quality of care are not compromised, regardless of the fidelity of the product.

Limb-O2 will be developed in three stages starting with the splitting of Continuous Positive Airway Pressure (CPAP) machines which are typically used to manage sleep apnea. Once this system has been designed, fabricated, and tested, the subsequent phase will involve the splitting of Bilevel Positive Airway Pressure (BiPAP) machines. BiPAPs differ from CPAPs in that they provide two pressure settings, one each for inhalation and exhalation, as opposed to only one pressure setting on CPAPs, and this is a slightly more complex engineering challenge compared to splitting CPAPs. If the team is successfully able to split CPAPs and BiPAPs for use by multiple patients, both of which are non-invasive methods of ventilation, the third phase would look at tackling invasive ventilation with multiple parameters including the volume of air that is delivered to each patient and the rate at which the air is delivered, all while the patient is sedated and the ventilator is breathing for them.

The team is adopting an iterative approach to gain more confidence from stakeholders by proving that various methods of ventilation can be split, ranging from a simple system that has one setting to a complex system with multiple settings. In doing so, members of the team are also improving their understanding of various elements of medical device design such as pneumatic circuits to provide airflow reliably, materials and biocompatibility, a user interface for a dashboard that displays respiratory monitoring controls, and overall user experience for assembly, operation, and maintenance.

The impact Limb-O2 has on the design and technology spheres is immense. It goes to show that with careful thought and empathy for the end-user, a low-cost product can be designed for any application without compromising the quality of care, safety, or customer experience. Regardless of the product's success, the hope is that others can draw inspiration from the process we followed and innovate solutions that are affordable, accessible, and equitable.