222 Solutions is a far-UVC sanitizing ecosystem consisting of two devices: NODE and ABUV. These devices actively sanitize the air and surfaces with far-UVC for an unmatched level of sanitization with minimal human interaction.

Far-UVC is a specific band of ultraviolet (UV) light that disables pathogens in the air and on surfaces. Far-UVC cannot penetrate dead skin layers the tear layer of our eyes, making it safe to operate near people.

NODE is portable, perfect for cup holders and handheld use. NODE oscillates left and right like a stationary fan to cover a broader area.. NODE can operate independently, but it works best with ABUV to extend far-UVC coverage in larger vehicles.

ABUV is a ceiling-mounted far-UVC device with superior coverage in all vehicles. ABUV's vantage point allows light to travel and disinfect in hard-to-reach areas. ABUV works with NODE to clean all day, keeping drivers and their passengers safe. 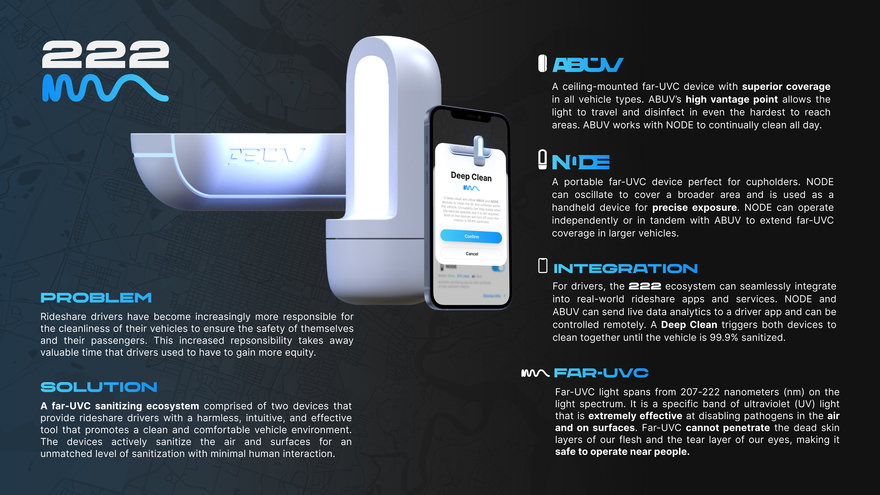 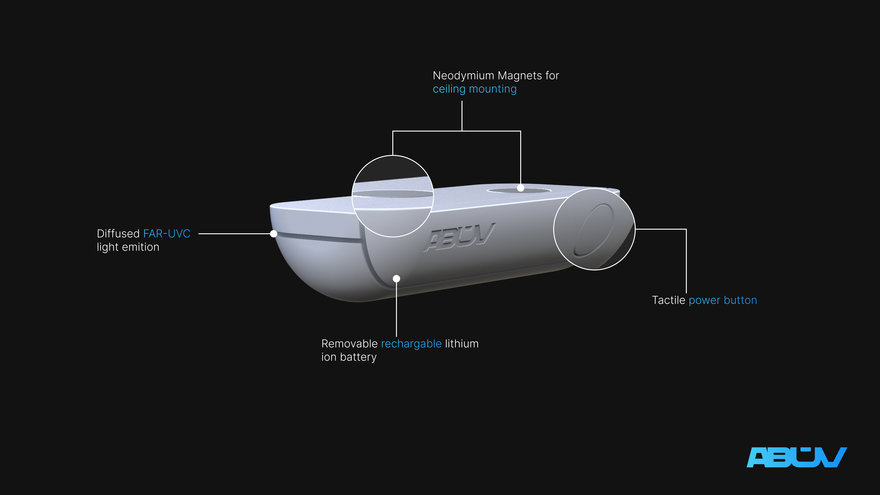 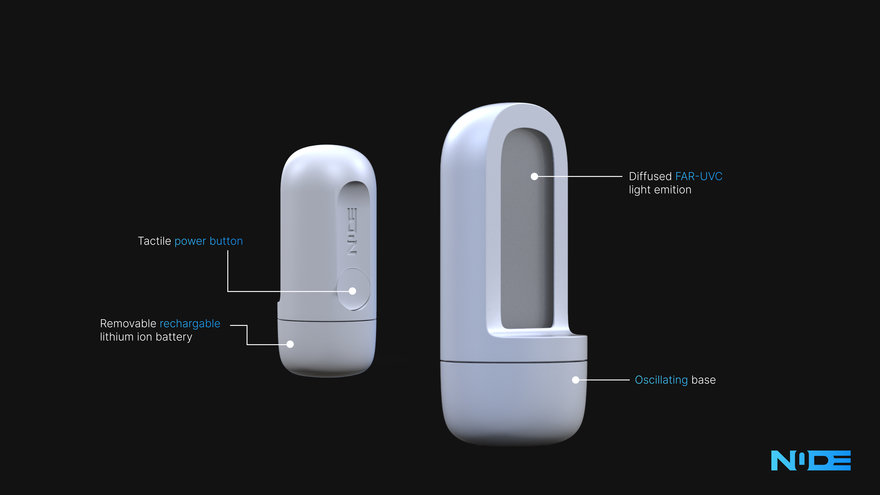 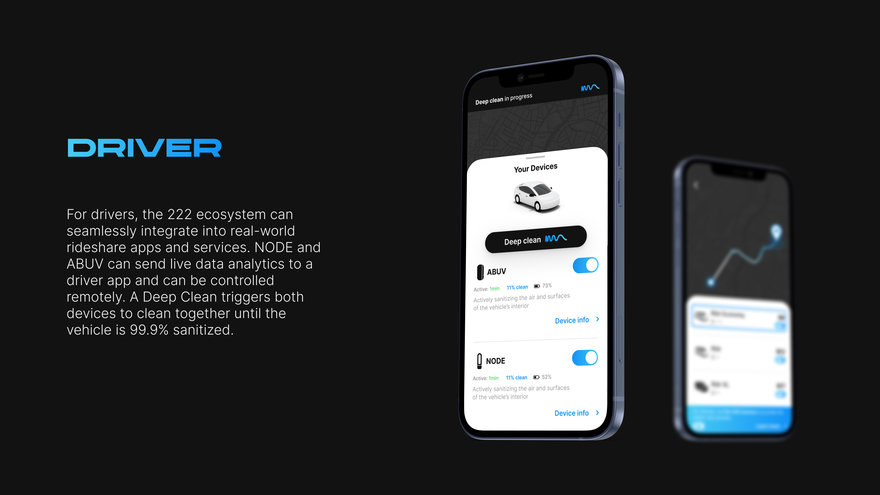 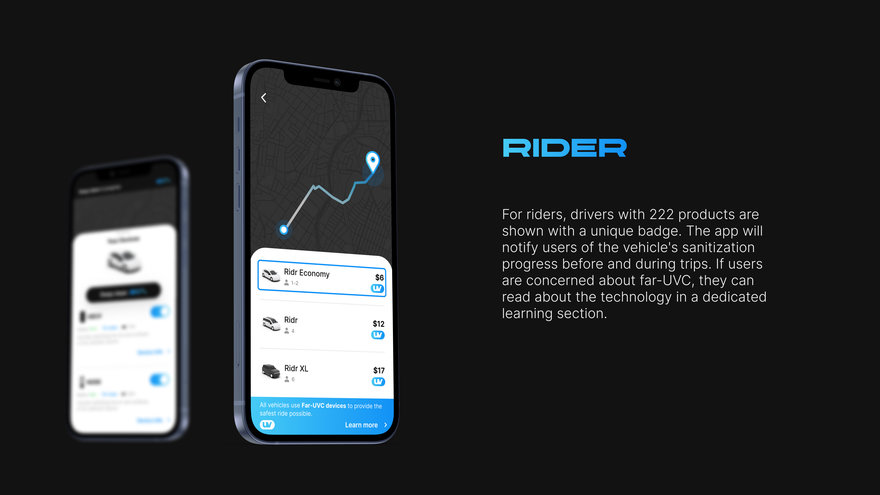 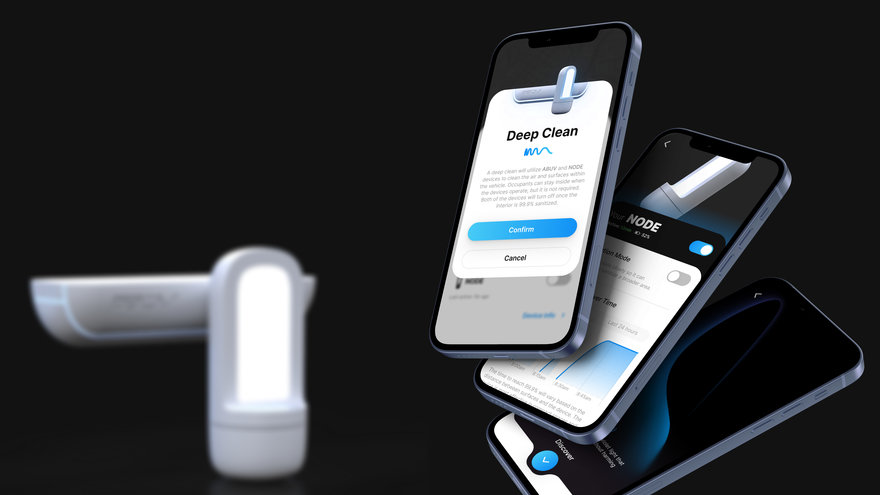 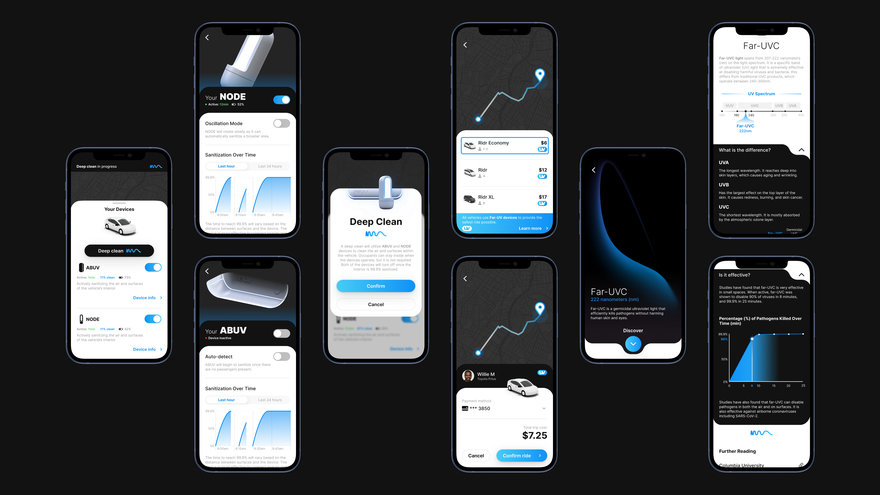 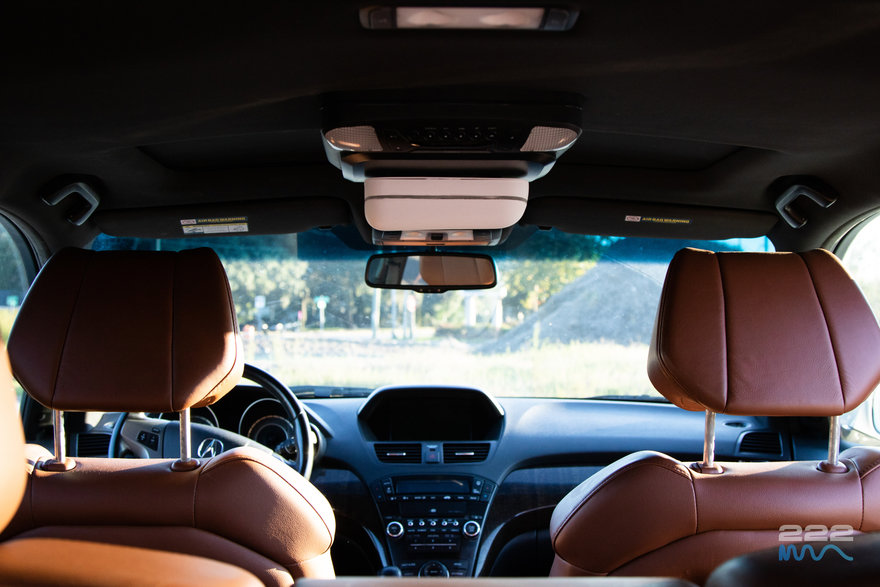 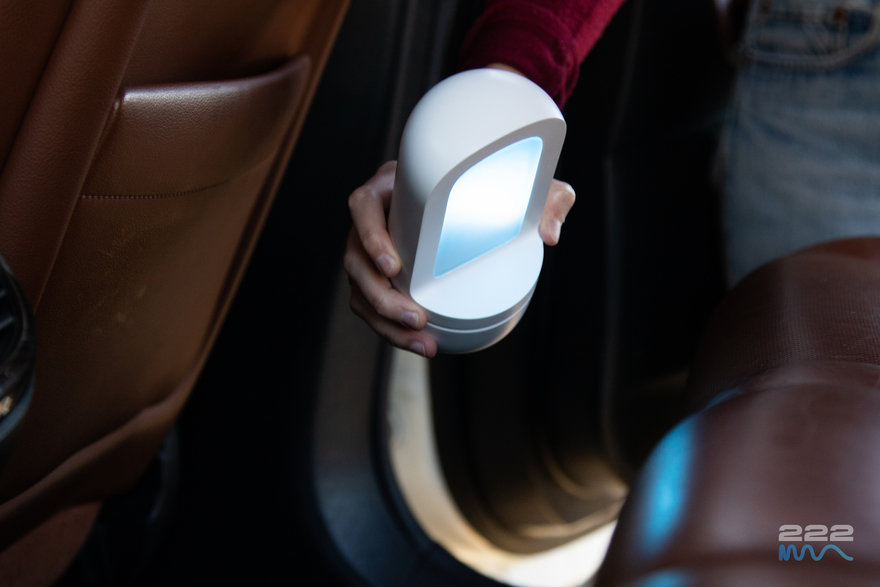 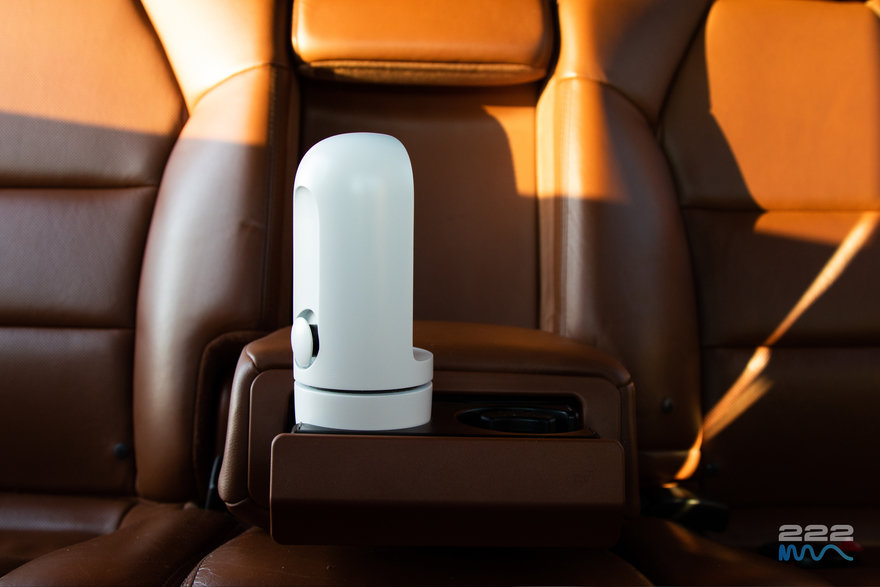 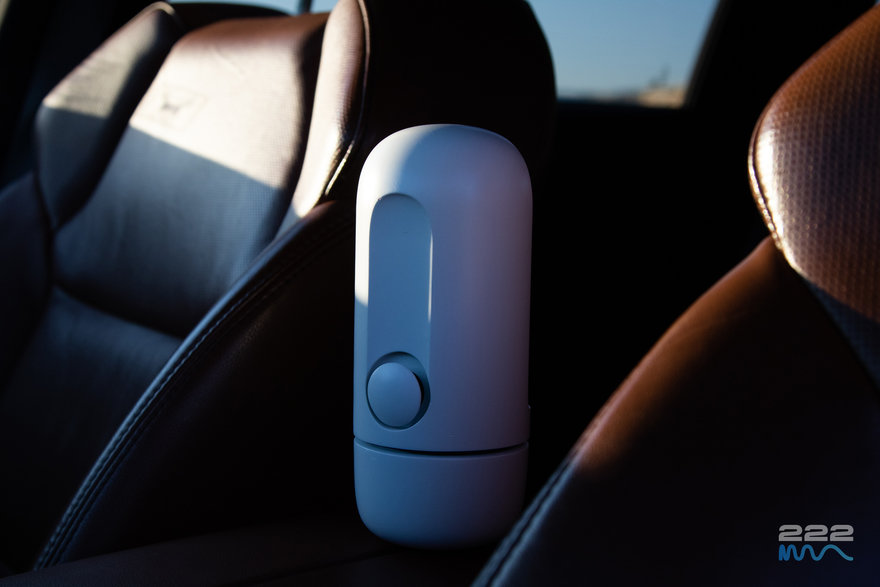 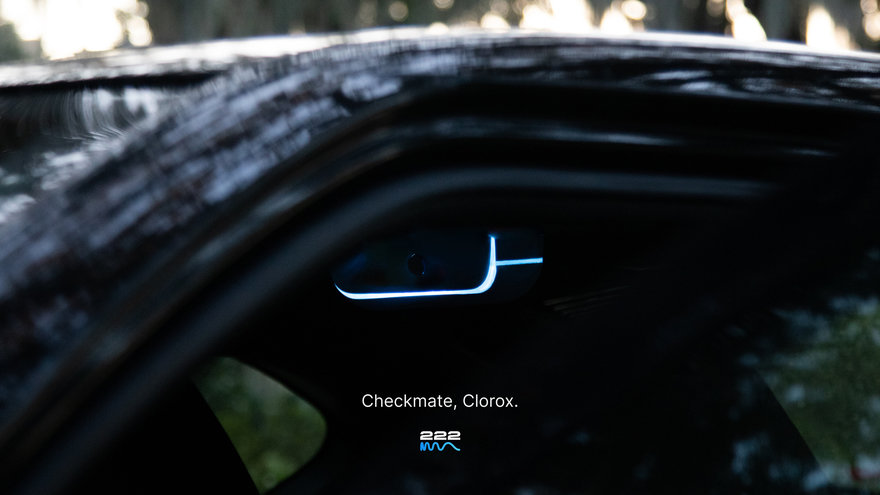 Due to the ongoing pandemic, rideshare drivers have become increasingly more responsible for the cleanliness of their vehicles to ensure the safety of themselves and their passengers. This increased responsibility takes away valuable time drivers had before the pandemic that they used to generate more income.

NODE and ABUV are two devices that provide rideshare drivers with a harmless, intuitive, and effective tool that promotes a clean and comfortable vehicle environment for themselves and others. The devices can be used independently or together to constantly sanitize the vehicle's interior. Drivers will not have to take the time to stop and sanitize their vehicles by hand, since they can keep NODE and ABUV on at all times.

NODE and ABUV use 222nm far-UVC light that is harmless to humans, yet very effective against pathogens in the air or on surfaces. Far-UVC is a direct approach to limit airborne viral transmissions by inactivating them within a short time of their production. According to research by Dr. David Brenner at Columbia University, continuous far-UVC exposure results in ~90% viral inactivation in ~8 minutes, 95% in ~11 minutes, 99% in ~16 minutes and 99.9% inactivation in ~25 minutes. Drivers can also choose to perform a deep clean, where the devices will thoroughly clean the vehicle interior to 99.9% inactivation before turning off automatically and notifying the driver of its completion.

NODE and ABUV are the first of their kind. Currently, drivers are struggling to maintain their vehicle interiors without taking time away from driving passengers to clean. Often, they don't — many choose to forgo the cleaning process entirely in order to generate the income they desperately need. The more rides that can be performed, the more money that can be made for the driver and the rideshare company.

Both drivers and riders benefit from a clean environment, especially since riders share a space with other riders they'll never see. In a restaurant, you can sit far away from someone who looks sick. At a music festival, you can move away from someone who you notice coughing. In rideshare vehicles, you aren't able to avoid these people because you don't know they exist. This holds true especially for the family and friends of the driver, as those people will interact with every single user the driver serviced before they got home. NODE and ABUV, whether noticed or not, will keep the riders of rideshare services healthy and happy. This gives our solution legs beyond the pandemic, as far-UVC is effective against many different pathogens and germs.

Our research indicates that health by itself is a benefit worth pursuing, but there's a more immediate and tangible benefit, too — rideshare drivers can complete more rides and spend little to no time sanitizing their vehicles by hand. Because far-UVC light exposure is safe for humans, drivers can choose to keep the devices running continuously with others in the vehicle. After a long day or during a short break, drivers can activate a deep clean and let the devices sanitize the vehicle for them. Rideshare drivers will be free to perform as many rides as they would like knowing that everyone in the vehicle is safe and protected from any and all pathogens that can be found in a shared space.

Based on our small sample of user tests with the products, we have found that rideshare riders would pay more for a ride knowing they are safe from any diseases or pathogens in a vehicle. Riders also stated they would ride exclusively with a rideshare company if the entire fleet were deployed with an ABUV or NODE device. Rideshare companies can supply their drivers with 222 Solutions to gain a competitive edge over those who do not.

NODE and ABUV can be used anywhere. They are not just reserved for use in rideshare vehicles. 222 Solutions can be used within all types of enclosed areas such as public transport, shared public spaces, and small rooms. In order to be effective, NODE and ABUV need to be within a reasonable distance to deliver effective far-UVC sanitation. With widespread adoption of NODE and ABUV, society can gain a sense of security and decreased levels of anxiety and stress that come with the added worries of a global pandemic. This is also a viable solution for users who may not be able to take a vaccine due to their individual health concern — not only for the novel Coronavirus, but also other diseases like Polio, the common cold, and Influenza.

ABUV and NODE are white to offer riders and drivers with feelings of peace, comfort and hope. The far-UVC light emits a faint blue light, which is not overly distracting to vehicle occupants when it is dark. We found users associate white with cleanliness and the light blue lights with UV, giving intuitive clues to the device's function.

ABUV is rounded so the device blends in with the ceiling of the vehicle. A band of UV light wraps around the base of the device to cover nearly all of the surfaces in the vehicle. A vertical band runs down the back of the device so it is not a distraction in the rearview mirror. ABUV is compact enough that it does not obscure a driver's vision when looking out of the back windshield.

NODE is meant to be picked up and held, and is shaped to fit inside any cupholder. The UV band is placed down the center of the device so users can aim the light directly at their target. Buttons on the back and grip points on the sides intuitively guide the hand to hold it without obstructing the light. A ring around the base clearly defines the axis of rotation, indicating its oscillating function.