Alta is a portable hyperbaric chamber for use in high altitude by those who experience the effects of High Altitude Illness (HAI) including High Altitude Pulmonary Edema (HAPE) and High Altitude Cerebral Edema (HACE). Use of a hyperbaric chamber increases the partial pressure of oxygen, thus the amount of oxygen available to the brain and throughout the body. This simulates a descent of 1500 to 2500m which mitigates the effects of HAI and minimizes the likelihood of death.

The objective of this project was to design an effective, lightweight, portable hyperbaric chamber to be used by recreational mountaineers in the field. The project was completed over nine weeks by ten 3rd year product design students and encompassed extensive research, expert interviews, ideation, prototyping, and testing as well as the production of a final working prototype. 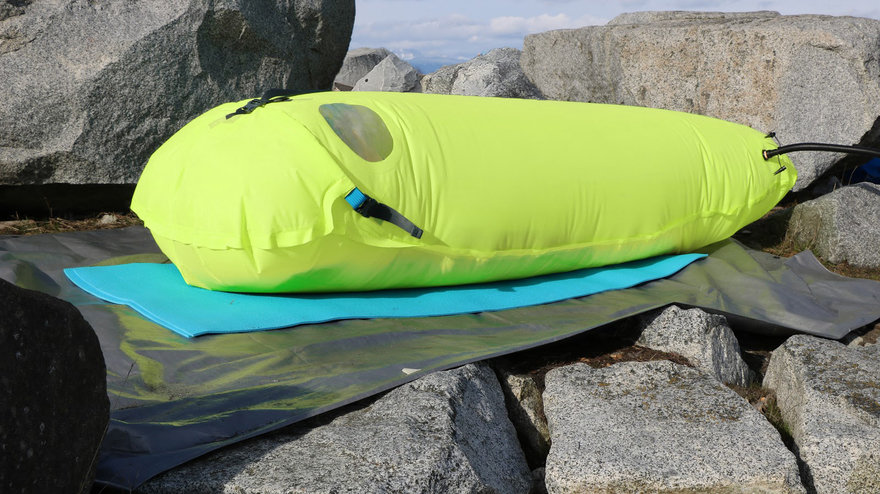 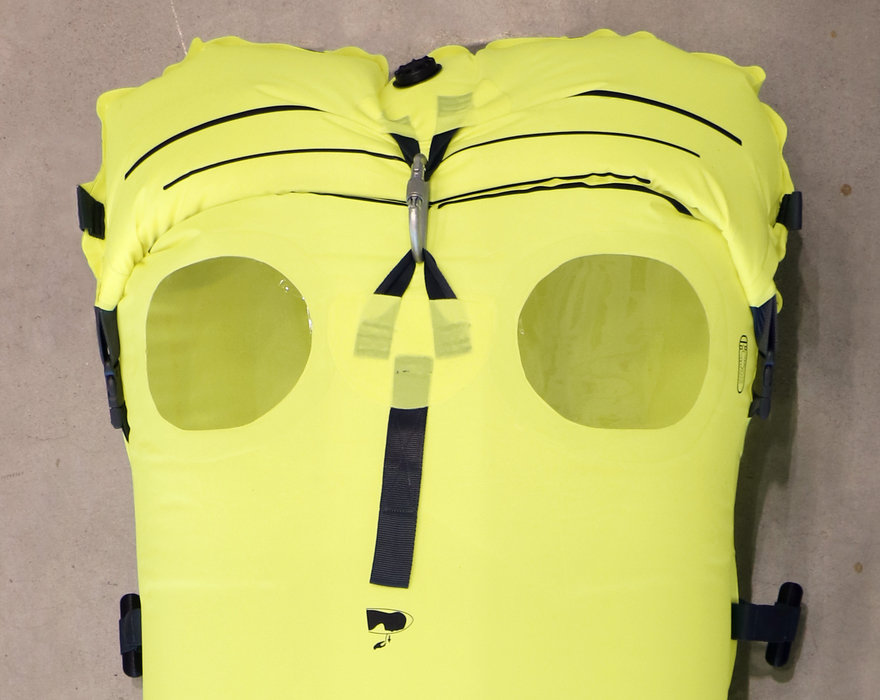 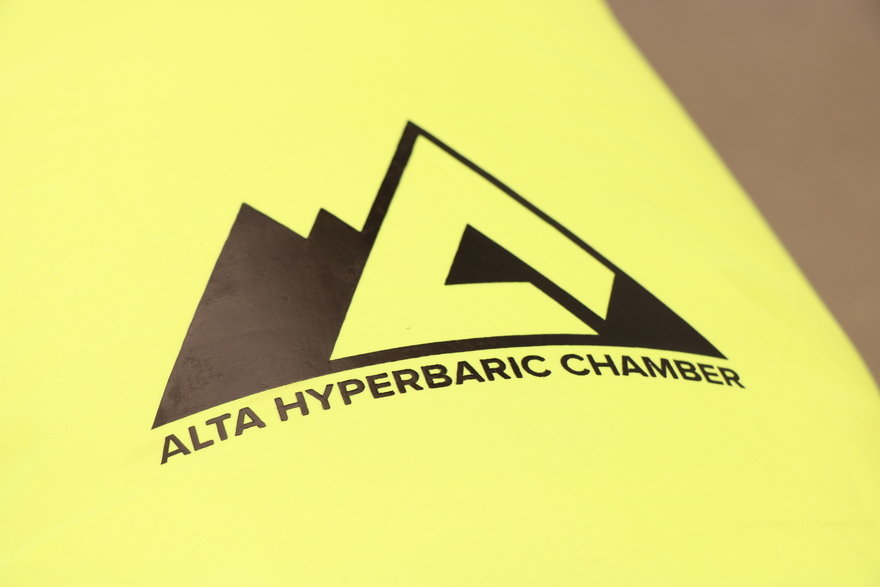 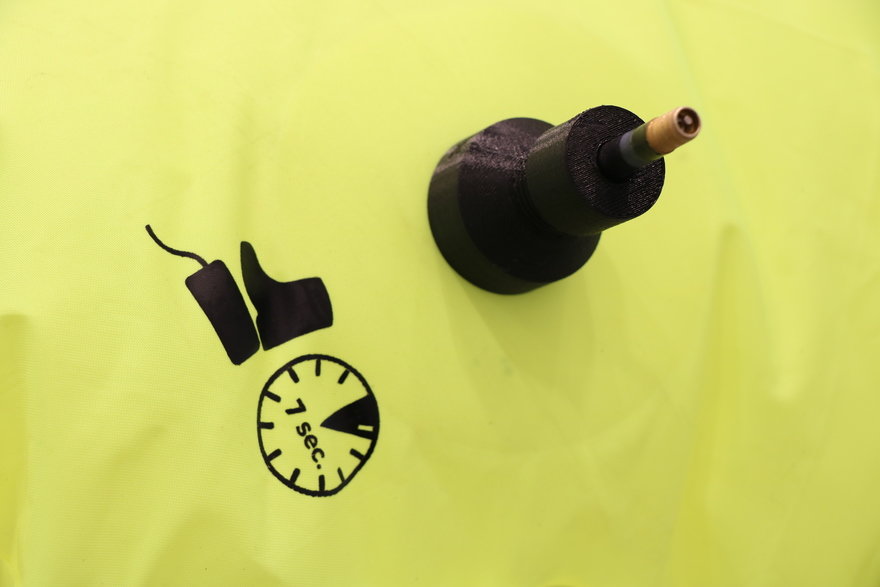 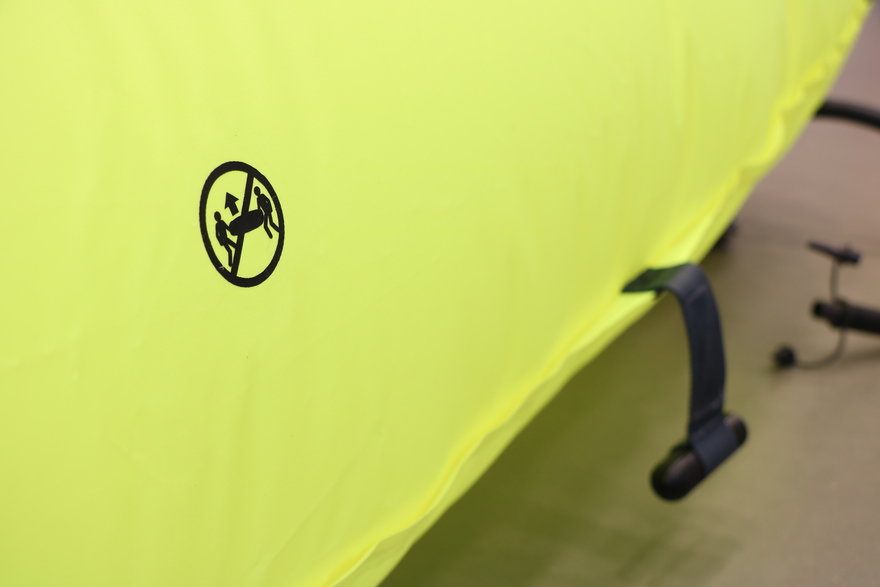 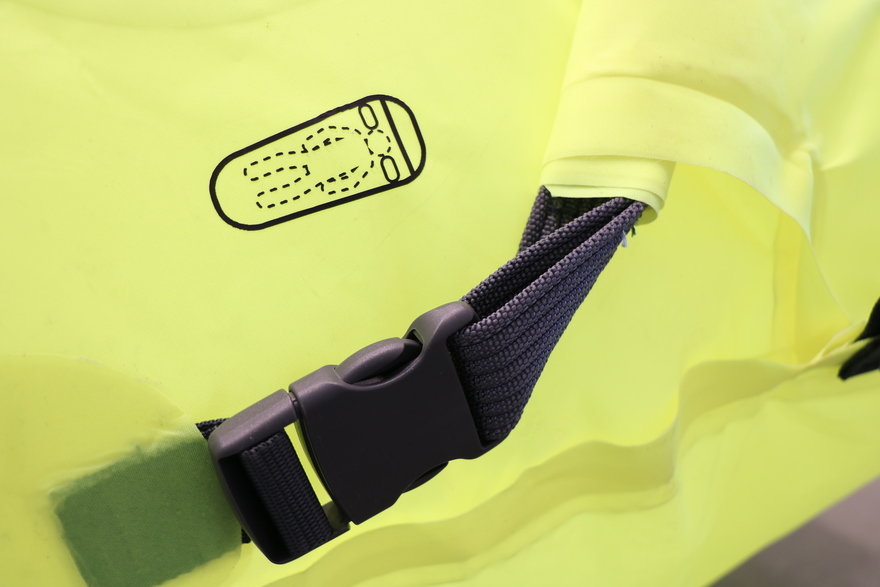 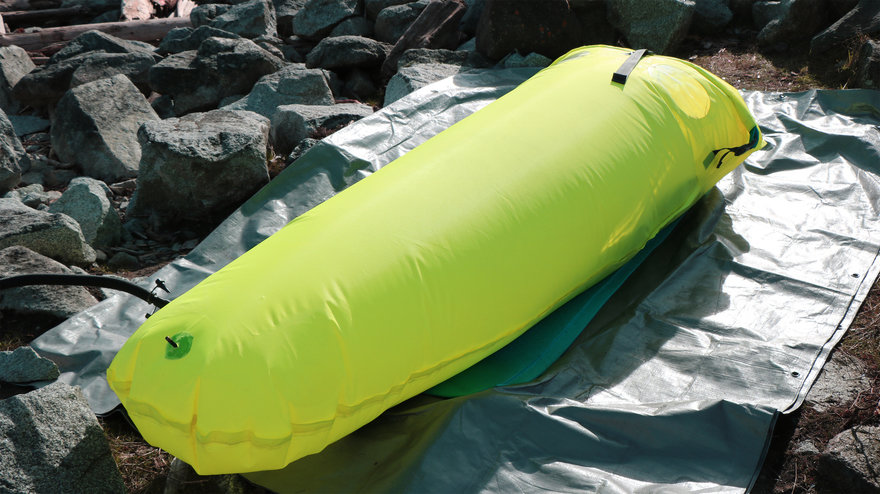 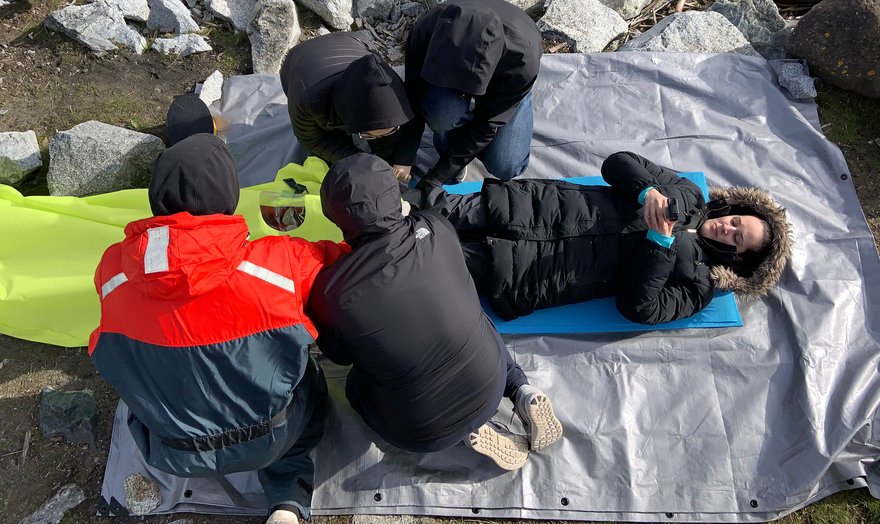 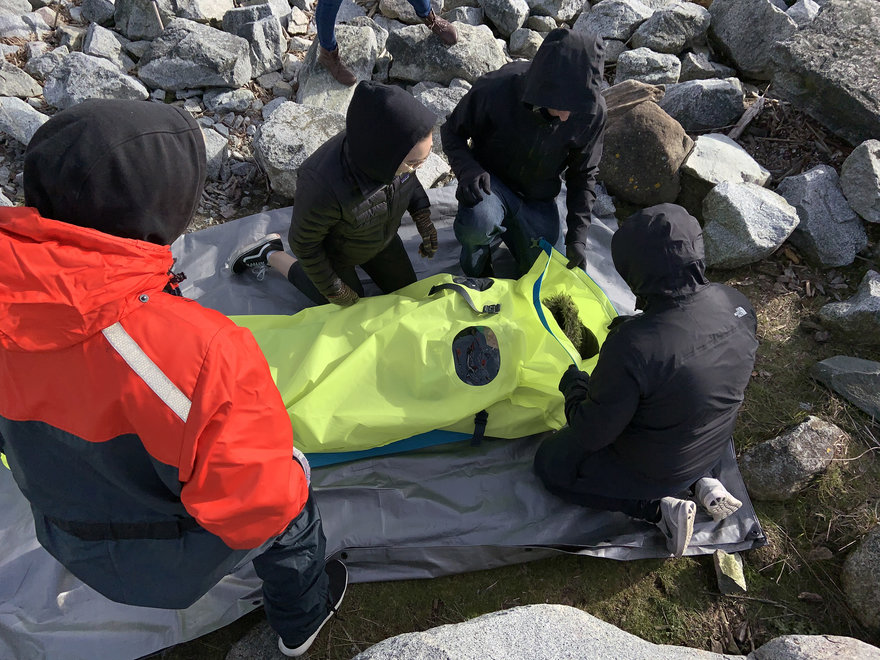 Alta Hyperbaric Chamber Assisting a user into the chamber 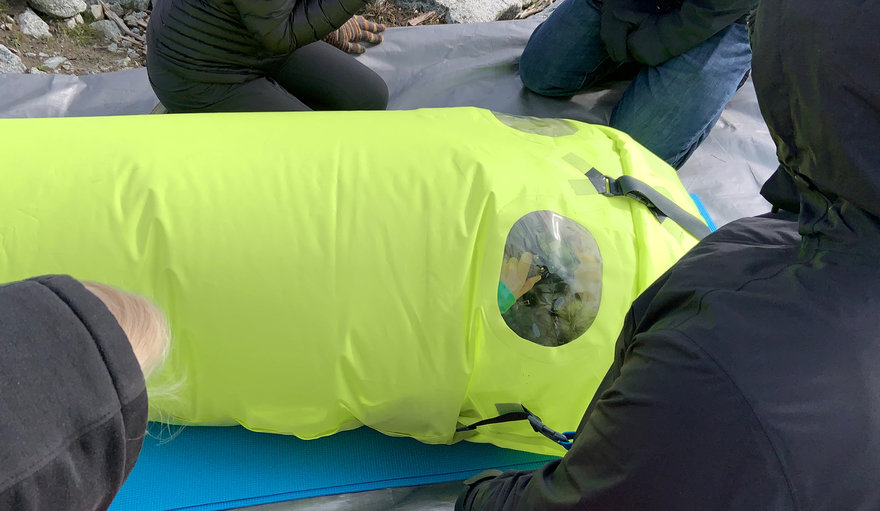 Alta Hyperbaric Chamber Monitoring a user inside the chamber

A hyperbaric chamber is a device that works to alleviate the symptoms of HAI, which include dizziness, nausea, fatigue, headache, shortness of breath, and more. Relative to the atmosphere in the external environment, the pressurized chamber has a higher partial pressure of oxygen. When a victim of HAI is placed inside the chamber, their body is able to recover from the symptoms so that they may safely descend.

Personal hyperbaric chambers are life-saving equipment that can be carried in the field by mountaineering teams, or by search and rescue personnel, to treat the symptoms of HAI. Hyperbaric chambers have been limited to a small market dominated by three companies; Gamov, Certec, and PAC. Each of these companies offers a product with their own pros and cons including cost, weight, inflation system, durability, and ease of ingress and egress.

Mountaineer's packs can reach weights greater than that of their own bodies increasing the need for all equipment to be extremely lightweight. The lighter the equipment is, the more likely climbers will pack the items for their expedition, which could ultimately save their life.

High altitude mountaineers are daring adventurers who seek to reach the highest peaks. Mountaineers face treacherous landscapes and unpredictable weather, making preparation for climbs critical. The increasing popularity of climbing has resulted in longer wait times to reach the summit. This, combined with increasingly unpredictable weather, has resulted in inexperienced climbers rushing their ascents and leaving inadequate time for their bodies to acclimatize. When the climb is rushed, and acclimatization has not been achieved, symptoms of HAI may set in.

The higher the summit, the greater the risk for mountaineers to experience HAPE and HACE. Every meter of ascent decreases the partial pressure of oxygen, triggering dangerous sympathetic responses from the body. These responses are amplified by the physical exertion of climbing and can lead to debilitating illness and death.

The recommended treatment for HAI is always descent. When that is not possible, the use of a hyperbaric chamber can achieve similar results, reducing or alleviating symptoms until descent is possible. Existing chambers are heavy, isolate patients from outside aid, limit communication, and have been only available to trained professionals. Marketing and education have also been poor with many climbers unaware of their existence.

The design process behind Alta involved extensive experimentation and interviews with experts in the fields of mountain medicine, inflatables manufacturing, and hyperbaric oxygen therapy. Early stages included broad academic research and multi-stage material testing. The team also met with accomplished mountaineers, Chris Dare and Liz Rose, to understand the complications of high altitude climbs. Once the groundwork had been laid, ideation began with sketching and quarter scale three-dimensional prototypes. It was quickly discovered that the most challenging part of prototyping was making a structure completely airtight. This led to further material and construction testing until the prototypes could be reliably inflated to the required 2 psi. It should be noted that the equipment to safely test for the preferred factor of safety at 8 psi was unavailable. Prototypes were evaluated at every stage and assessed for form, function, and design features using a design evaluation matrix. The information from these tests influenced the resulting prototypes and design direction.

Extensive material testing informed decision making from start to finish. Initially, 38 materials were evaluated, weighed, and tested for air and water permeability. Material samples were then plotted on two axes of weight and air/water permeability, to decide what materials to use for further prototyping and testing. The findings determined that after air permeability, the most important factor in material choice was bond strength of seams, so the material selection was condensed to those with heat-bondable coatings before conducting further testing. The next tests included abrasion, tear, and seam strength. Seam strength was tested by pull-testing samples at 50mm/minute until the breaking point, and included flange seams, followed by taped flange seams, which were found to be at least two times stronger. The best fit material option for the chamber body was determined to be a polyurethane-coated nylon, as well as a Polyvinyl Chloride (PVC) sheet for the windows. For external components including the carry case and pump, a nylon ripstop fabric was selected for its light weight, abrasion resistance and high tensile strength.

Once confident in the construction method at quarter-scale, full-scale prototypes were created which allowed for user testing. Prototypes needed to fulfil our functional requirements including airtight construction, patient access, durability, portability, and ease of operation. Testing of near-final prototypes was conducted both in a controlled indoor setting, as well as in the field which provided key insights that informed the final design. Upon testing the final prototype, users agreed on a number of key points. The chamber was easy to set up, simple to inflate, and the roll top was intuitive to use. Testing was done by members of the design team who volunteered to act as conscious and unconscious victims of HAI. The testing protocol was developed using the insights gathered from interviews with search and rescue experts. The acting victim found the interior to be spacious and communication through the chamber was effective.

At a total system weight of only 5.12 lbs (2.32kg), Alta is 33.5% lighter than the Ultra-Lite Gamow chamber, which is the lightest on the market. This reduction of weight is due to the absence of heavy zippers that are standard in current models, as well as a proprietary foot pump that uses an ultralight, compact open-cell foam structure to inflate the chamber quickly and easily. By removing the most common failure point in current models, the zipper, and introducing a roll top closure, Alta's design is both lighter and more secure than its competition.

This significant decrease in weight and increased ease of use offers a crucial innovation in the on-site treatment of HAI. The lighter weight appeals to climbers and will increase the rate of adoption ultimately decreasing the number of preventable incidents of injuries and deaths due to HAI. Alta was created with the mountaineer in mind and a reduction in weight being the top priority.

Additional thanks to Alex Biem of Tangible Interactions, Klause Kallesøe of BaroMedical, and Stephanie Flynn from KPU physics department.